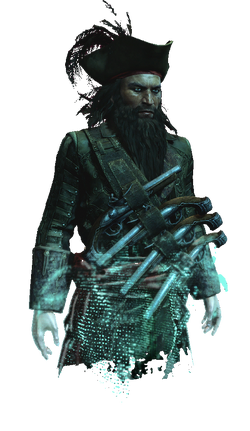 Known variously by different sources as Thatch, Teach, Theach, Tache, Titche, Teatch, Tack, and more, we are fairly certain this Edward was born in or around Bristol and took to the sea at an early age, most likely in his teens. It is also speculated that he arrived in the West Indies quite soon after leaving England.

If this was indeed the case, Ed Thatch would have seen his fair share of the War of Spanish Succession, a protracted fight between most of the Empires of Europe that pitted Britain against royalist Spain and France. In these early years, from 1700 to 1713, he would have been a privateer or at the very least a merchant seaman, doing his part for the crown—Queen Anne at the time.

But with the Treaty of Utrecht bestowing peace upon a troubled Europe in 1713, Thatch and his fellow sailors would have found themselves far from home and out of work. They thus turned to piracy as a means of sustaining themselves. In the ensuing years, Thatch befriended a Captain named Benjamin Hornigold and soon after joined his crew as quartermaster, at some point between late 1714 and early 1716.

Settling in Nassau, Thatch, Hornigold, and the rest of the "Flying Gang" as these pirates called themselves, began cooking up schemes far larger than most pirates of the era dared dream. Wanting nothing less than a country of their own, they worked to turn Nassau into a place of liberty and freedom for all who desired an escape from the bonds of imperial rule.

As Thatch's reputation as a worthy and fearsome seaman grew, so did his ideas about piracy. At some point in the latter half of 1717, having grown a long and frightful beard, he took to calling himself "Blackbeard", and worked at every turn to bolster his legend as the most feared pirate in the West Indies. Thatch reveled in the power of a good legend, and worked hard to cultivate his... frequently sticking lit slow-matches in his hat to raise a frightening cloud, or challenging his crews to endure long stretches below deck as burning sulfur clouded the hold.

After helping Hornigold take command of a number of vessels, Edward Thatch finally acquired a ship of his own in September 1717—a vessel called "The Adventure"—captained by the most unlikely pirate of them all, one Stede Bonnet. For two months, Thatch captained the Adventure, with Stede content to tag along as a passenger. But in November Thatch's fortunes improved further when he captured a massive French slave ship called La Concorde. Renaming her Queen Anne's Revenge in honor of his former Stuart Queen, Edward "Blackbeard" Thatch was now one of the most feared and deadly pirates in the West Indies.

For the next year he terrorized the West Indies and environs, before sailing north to the British colonies in North America. Here he frightened the inhabitants of an entire city when he blockaded the port of Charleston, South Carolina, in an attempt to acquire medicine for his ailing crew.

But shortly after this audacious gambit, Blackbeard decided he'd had enough of the pirate life. He was nearing forty and, despite his ferocious reputation, had lost his love for the pirate's game. In the early summer of 1718, he half-heartedly accepted a pardon from his friend Charles Eden, Governor of North Carolina. But by late August of that same year he had fallen back into his old habits, restricting his activities to the southeastern coast of the North American British colonies. Unbeknownst to him, the Governor of Virginia, Alexander Spotswood, was keenly aware of his continued piracies, and was busy organizing a party to "extipate this nest of vipers".

In November of 1718, Spotswood offered money to Lieutenant Maynard to see the job done. Taking command of a few fast ships well suited to the shallow inlets where Blackbeard was known to hide, Maynard set off in search of his prize. He learned from passing ships that Blackbeard was likely anchored on the inland side of Ocracoke Island, an ideal haunt for a pirate. As dusk fell on November 21st, Maynard and his crew spotted Blackbeard's rag-tag group, but decided to hold off their attack until the tide rose. In the early hours of the following day, Maynard's crew slipped into the bay and approached Blackbeard's ship. They were greeted by a sudden volley of pistol shots and cannon fire. This caused Maynard to retreat, giving Blackbeard and his crew time to slip through the shallow waters and attempt an escape.

Add a photo to this gallery
Retrieved from "https://assassinscreed.fandom.com/wiki/Database:_Edward_%22Blackbeard%22_Thatch?oldid=769023"
Community content is available under CC-BY-SA unless otherwise noted.