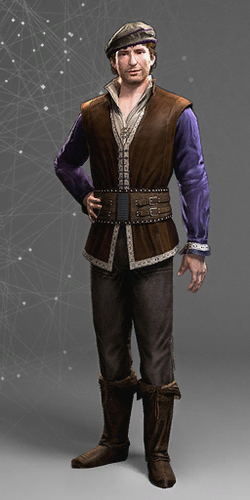 After breaking things off with Claudia Auditore, records indicate that Duccio's marriage into the Pazzi family was cut short by their exile following the Conspiracy of 1478. Rebounding with several substantial donations to the textile guilds, Duccio became a wool trader, exporting Florentine products across Italy.

He was not exactly well-liked by the business world: "The rotund man who sold me the silks tried to charge more florins than the silks were worth, considering me to be uneducated in textile prices. I took him for a rube, and purchased only red silks, which fetch a far higher price at market. Now who is the ignorant one?" wrote one wool merchant in Siena, presumably speaking about Duccio, who is referenced several more times in the man's books under various monikers, such as "stooge", "pig" and "son of a whore".

Roman shipyard manifests indicate that Duccio bought a small ship in 1490, presumably in an attempt to become an alum trader. Unfortunately, the boat he owned was too small for alum trading, which required a large ship to be profitable. His record books show little to no profit for the years of 1490-1496. In 1497, he ceased to carry alum, instead transporting a variety of goods between cities. Some small success was achieved smuggling forbidden merchandise out of Florence during Savonarola's rule.

Ultimately, his luck turned sour and he died penniless in 1520, medical records are unclear but his death seems to have resulted from rabies after a starving Roman dog attacked him in search of food.

Retrieved from "https://assassinscreed.fandom.com/wiki/Database:_Duccio_de_Luca?oldid=809568"
Community content is available under CC-BY-SA unless otherwise noted.