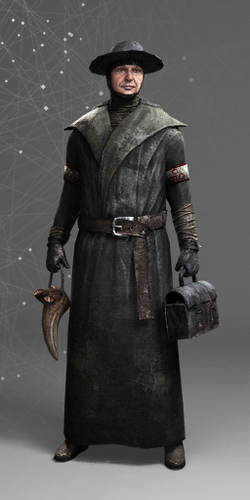 Diagrams of the human body and the printing press influenced Renaissance medicine greatly, which had in turn been influenced by Arabic medicine during the Middle Ages.

By the 15th Century, science had already begun its slow climb toward becoming more relevant than spirituality in the field of healthcare. However, many people stubbornly clung to old ways, visiting local mystics instead of doctors.

After the plague ravaged Europe in 1350, many doctors dressed in special plague gear to treat patients. To prevent contamination, they wore a cape coated in wax, and a primitive gas mask in the shape of a beak.

Retrieved from "https://assassinscreed.fandom.com/wiki/Database:_Doctors_(Brotherhood)?oldid=833113"
Community content is available under CC-BY-SA unless otherwise noted.