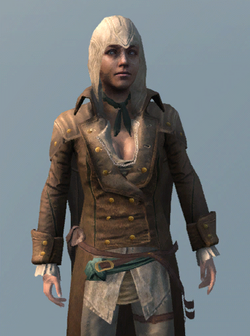 Deborah Carter was a courier in New York City at the time of the Revolution. She's the daughter of a merchant, Amos Carter, who was locally known for owning and bankrupting numerous businesses, and racking up significant debts.

Deborah was turned onto the streets at the age of 10 and took up work as an errand-runner, disguising herself as a boy to do it (hence the nickname 'Dobby'). Many of the tradesmen she worked for knew who she really was, but pretended to be fooled by the disguise. Possibly at first because they understood that her other options were limited, but later because she was quick, reliable and intelligent.

As a teenager, "Dobby" had to drop her disguise – but she kept her nickname. She continued her career carrying messages – and began negotiating contracts between businesses. She became something of a community icon – making sure the poor in the neighbourhood had food and clothing, and fighting against merchants who were charging exorbitant prices for staple items – a bit like Robin Hood, though when Dobby wore tights, no one giggled. And it was as a community icon that she met Connor.

Incidentally, I'm not being completely figurative when I say she was 'fighting' merchants. She wasn't averse to throwing a punch or two when it was necessary, particularly in her own defense – or the defense of others in her neighbourhood.

Retrieved from "https://assassinscreed.fandom.com/wiki/Database:_Deborah_%27Dobby%27_Carter?oldid=878394"
Community content is available under CC-BY-SA unless otherwise noted.