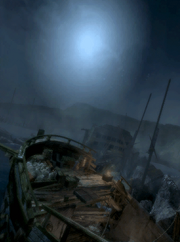 Not exactly a first date venue, this.

Dead Chest Island is part of the British Virgin Islands, though it's an island in the same way that Pluto is a planet - It's really more of a big rock.

However, I won't deny the place has an interesting name - and an interesting history. According to legend, Edward Teach - better known as Blackbeard - visited the "island", and left 15 of his crewmen here as a punishment. Each crewman each had a bottle of rum and cutlass - and when Blackbeard returned, most of the man were dead. Maybe the rum was bad.

Retrieved from "https://assassinscreed.fandom.com/wiki/Database:_Dead_Chest_Island?oldid=679393"
Community content is available under CC-BY-SA unless otherwise noted.