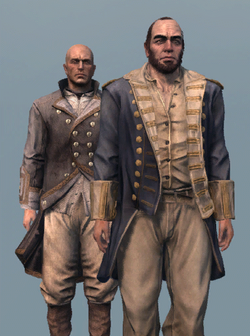 B. 1733, 1735
David and Richard Clutterbuck were gunners in the Merchant Navy, starting in the mid-18th Century. According to their reputation, these two aren’t averse to a friendly fistfight over pretty much anything –so if you’re talking to them, try not to mix up their names. David is the older brother, Richard the younger. Oh. And definitely don’t try and be funny with their surname.

The Clutterbucks were a Dutch family, who moved to London when David and Richard were young. Their father was a dockworker, and so the two brothers grew up near (and in) the dockyards, running errands to pass the time and earn extra cash. They showed an early aptitude – an affinity, if you will – for fighting. The two brothers joined a crew with Robert Faulkner on board of the Stalwart in 1750 and working with him until he disappeared in 1753.

Unlike many who go to sea in search of adventure and treasure, the Clutterbucks’ motivation was somewhat different – guns. They grew up hearing the stories of the sea, but it wasn’t until they overheard a gunner talking about the power of his cannon, that they decided a sailor’s life was for them.

(The sailor was not, in fact, talking about an *actual* cannon, but the impressionable lads missed it. Do you see what I’m saying? I’m saying he was talking about another type of cannon. A different weapon altogether. I’m saying he was saying his “cannon” had “power”. I’m using speechmarks to make it obvious. He had a powerful “weapon”. He “wielded” an enormous “penis”. Still don’t get it? Oh well.)

The Clutterbucks spent years traveling on various merchant and privateer vessels – almost always hiring on as a pair. They eventually settled semi-permanently in Martha’s Vineyard, taking it as a place to rest between contracts before they would get tired of all the quiet and hire on to another crew.

Retrieved from "https://assassinscreed.fandom.com/wiki/Database:_David_and_Richard_Clutterbuck?oldid=804749"
Community content is available under CC-BY-SA unless otherwise noted.