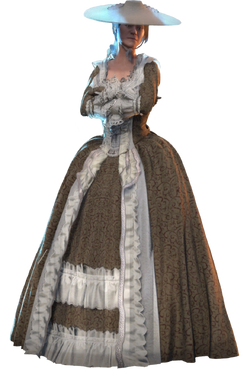 The daughter of a wealthy marchant from the south of France, Désirée crossed destinies with two extraordinary military men of the period. Initially engaged to Joseph Bonaparte, she was introduced to his brother, Napoleon. What sort of negotiation ensued is lost to history, but somehow Désirée's older sister maried Joseph and Désirée herself became engaged to Napoleon. The marriage was not to come to fruition: Napoleon became infatuated with the extraordinary Josephine Beauharnais, and Désirée met and later married the dashing officer, Jean Bernadotte. A few years later, her husband, via an unusual adoptive relationship was more-or-less "appointed" to be king of Sweden and Désirée became queen. *
--
* If you handed this in as the plot of a soap opera, they'd laugh you out of the building. Except the bit about being appointed King of Sweden - they'd love that.
--

Retrieved from "https://assassinscreed.fandom.com/wiki/Database:_D%C3%A9sir%C3%A9e_Clary?oldid=777305"
Community content is available under CC-BY-SA unless otherwise noted.