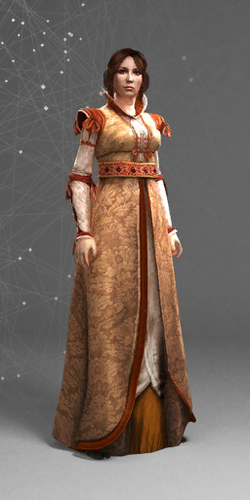 Cristina Vespucci was a well-known Florentine beauty and a favorite of painters, most notably Botticelli, who used her as a model for several of his paintings. Records kept by her father's guards indicate Ezio visited her frequently in his youth and that he was "unbelievably dexterous", as the guards were never able to catch him trespassing.

In addition to her looks, Cristina also seems to have been somewhat responsible for jumpstarting the career of her cousin, the namesake of a rather famous landmass. At a dinner party attended by Cristina and, among other illustrious guests, Lorenzo de' Medici, she was reputed to have been in conversation with Lorenzo and Manfredo Soderini about her cousin's brilliance as a sailor.

Well, apparently, she exaggerated his importance slightly to impress Lorenzo, and Lorenzo, charmed by her beauty, agreed to hire him. "Try Amerigo out. I bet after several years you'll name your shipping company after him", she is reported to have joked.

Biggest understatement of the century.

Retrieved from "https://assassinscreed.fandom.com/wiki/Database:_Cristina_Vespucci_(Brotherhood)?oldid=828989"
Community content is available under CC-BY-SA unless otherwise noted.