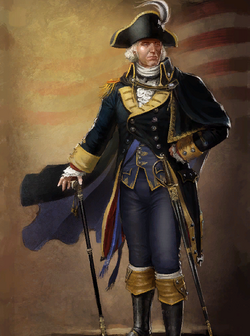 You might think of the Continental Congress as a gathering of boring politicians - which it was - but they were also responsible for organizing the Revolution and making decisions about the United States government, which also makes them rather dull.

I should actually say the "Continental Congresses", because there was more than one. The First Continental Congress was convened in 1774 in Philadelphia to oppose the closing of Boston harbor following the Boston Tea Party (part of the Coercive Acts).

All of the politicians had such a lovely time at their first meeting that they agreed to have another party just exactly like it - and why not? Everyone loves a party - right after the battles at Lexington and Concord. Being men of great imagination, they called this the Second Continental Congress. This was the Congress responsible for writing the Declaration of Independence, and forming the Continental Army with George Washington as its commander, so despite their lack of flair for titles they clearly had some thinkers among them.

The third Continental Congress was convened in 1781. It's sometimes known as the "Congress of Confederation" - and despite how mind-achingly tedious that sounds, they were responsible for forming a government for the brand-new United States. Since getting everyone to agree on how that government should work took some time, the Confederation Congress met over the course of 8 years ending in 1789, when the Constitution passed and they were replaced by the United States government.

Now, I've been in some long meetings, but 8 years takes the biscuit. I pity whoever was recording the minutes.

Retrieved from "https://assassinscreed.fandom.com/wiki/Database:_Continental_Congress?oldid=804286"
Community content is available under CC-BY-SA unless otherwise noted.