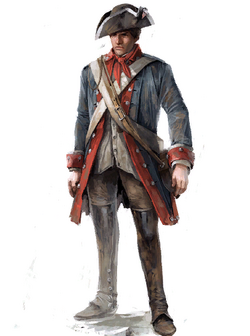 This was the army that George Washington led in the American Revolution, made up of various regiments supplied by the states. The army was officially established by the Continental Congress in June of 1775, shortly after the Siege of Boston began. In fact, it was formed specifically to deal with the Siege of Boston, which at the time was being carried out by the various militia who had fought at the Battles of Lexington and Concord.

The Continental Army was disbanded in 1783 after the Revolution was formally ended – possibly because people agreed the civilian militias were all the colonies needed to defend themselves – but also because Congress couldn’t afford to pay them. My money’s on that last one.

Retrieved from "https://assassinscreed.fandom.com/wiki/Database:_Continental_Army?oldid=804285"
Community content is available under CC-BY-SA unless otherwise noted.