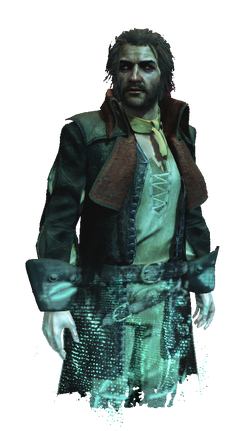 A common refrain in any biography of a Golden Age Pirate goes something like this: "Very little is known about this man's early life..." And with Charles Vane it's no different. We don't know where he was born, or where he grew up, or when he first took to sea. But maybe that's just as well, for it further heightens the mystery of this strange, unstable man.

Surely one of the most ornery and unstable of the "Flying Gang" -- the band of pirates who called Nassau their home for a time -- Charles Vane began his career like most pirates of the era -- honestly, as a privateer sailing for his King. Likely living in Jamaica in 1715, he was one of many aboard Henry Jennings' assault on a Spanish expedition to recover the gold from their ill fated wreck in 1715 off the coast of Florida.

Barely a year later it had become impossible to keep up honest work as a privateer, as British Governors were skittish about breaking the terms of the Treaty of Utrecht, which called for a cessation of all aggression between the major empires. Having few other options, Vane sailed to Nassau where many of his former colleagues were now living.

Quick to anger and ferociously mean, Charles Vane quickly earned himself a reputation as a difficult Captain to sail under. At some point in 1717 or 1718, an old friend, "Calico" Jack Rackham joined his crew as quartermaster. The two remained partnered for some time, living and working out of Nassau with the likes of Benjamin Hornigold, Ed Thatch, and Henry Jennings.

When Governor Woodes Rogers arrived in Nassau in the summer of 1718 to issue the king's pardon to all wayward pirates living there, Vane was among those who absolutely refused to submit. After sending a snarky letter of complaint to Rogers, Vane and his mates sent a fireship at the Governor's blockade and slipped out of Nassau's harbor.

For the next few months, these homeless Buccaneers sailed about the Bahamas making homes of coves and inlets, trying to find a place to settle down. In November of 1718, Vane even sailed north to the Carolina's to meet with Ed Thatch, hoping to convince his old friend to rejoin the old gang and take Nassau back from British hands. When Thatch refused, Vane was out of ideas.

Weeks later, Vane was sailing back to the West Indies when a French brigantine crossed his path. Having ideas of his own, Vane declined to attack. This didn't sit well with some of his crew, most notable "Calico" Jack Rackham, who had come to loathe Vane's dictatorial captaining style. Shortly after Vane's refusal, Rackham and a number of those loyal to him mutinied, deposing Vane and setting him adrift in a small sloop.

Some weeks later, Vane found himself marooned on a small island somewhere south of Cuba. He spent many weeks in isolation there, though it is suspected he must have come in contact with fishermen who were known to frequent the area. But for whatever reason, Charles Vane kept to himself until he was able to hail a passing British ship. Unfortunately for him, the Captain of the ship recognized him as Vane, the notorious pirate, and refused to bring him aboard. More weeks passed, and Vane was at his wit's end.

At last another British ship sailed passed, and Vane clambered aboard. He did his best to keep to himself, but in a cruel twist of fate, the captain of the first ship happened to be aboard this second. He spotted Vane after only a few days at sea, and pointed him out to the Captain. Vane was arrested on the spot and sailed to Kingston for trial.

There he languished almost a year in prison before his execution in early 1721 - a sad, whimper of a fate for a man once so full of explosive and angry energy.

Retrieved from "https://assassinscreed.fandom.com/wiki/Database:_Charles_Vane?oldid=726686"
Community content is available under CC-BY-SA unless otherwise noted.