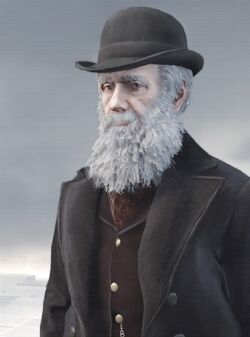 Charles Robert Darwin is best known for his contributions to evolutionary theory.

Darwin neglected an education in medicine at the University in Edinburgh in order to pursue his interests in nature. This annoyed Darwin's father, who sent him to Christ's College at the University of Cambridge, with the goal of turning him into an Anglican parson. By all accounts, he was not very interested in studying, preferring instead to spend his time riding, shooting, and collecting beetles. That's the 'hobbies' section of a dating profile I'd avoid. His time at Christ's College only intensified his obsessive passion for the natural sciences.

Darwin's detailed journal of his voyage aboard HMS Beagle made him famous in scientific circles. Upon his return, his father helped Darwin invest so that he could function as a self-funded gentleman scientist. I'd love to have that on by business cards. Darwin's many successes came at a cost, though, as the man was plagued by various illnesses caused by overwork.

Darwin was in international celebrity, who is remembered for providing a unified theory of the life sciences that explains the wide diversity of life on this planet. He was honourwed with a burial in Westminster Abbey.

Retrieved from "https://assassinscreed.fandom.com/wiki/Database:_Charles_Darwin?oldid=776992"
Community content is available under CC-BY-SA unless otherwise noted.