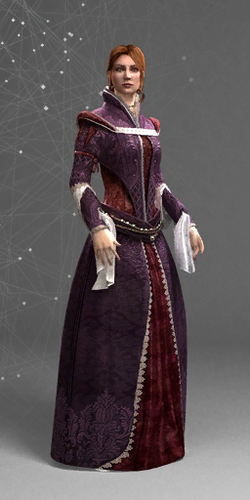 A countess by marriage, Caterina was notorious far before she ever arrived in Forlì. Raised in the court of Milan, she received a classical education while tutored in the art of war by her father, the Duke. At court, Caterina also acquired a passion for alchemy and hunting.

In 1473, when she was 10-years-old, Caterina became engaged to Girolamo Riario, the Pope's nephew. They consummated their marriage when she was 14.

Once in Rome, she was heralded as one of the most outgoing nobles at court, while her husband had a reputation for being one of the most ruthless. With the premature death of the Pope's brother, Girolamo gained even more power, securing the titles of Lord of Imola and Forlì.

When the Pope died, looters sacked Rome, destroying Caterina's residence. Unafraid, despite being 7 months pregnant, Caterina rode on horseback to the Castel Sant'Angelo and defended the Vatican with cannon fire and soldiers.

In 1484, she moved with her family to Forlì. Paid off by someone with a grievance against her husband, the Orsi Brothers killed Girolamo in 1488. As a result, Caterina became the ruler of Forlì and Imola.

She wasted no time, winning the favour of nearby rulers, revising the tax system and training the militia herself. Although she advocated peace, when those around her were hurt she dealt fierce vengeance, frequently killing enemies' wives and children in punishment.

In 1499, Cesare, in his quest for territory, decided to return Forlì to Papal rule. Side note: The Papacy claimed ownership of most regions in Italy. These lands were leant out to rulers, but Papal troops could march in and reclaim them at any point, much like libraries set out to burn down the homes of those who keep books checked out for too long. As Cesare marched toward Caterina, she sent the Pope a friendly letter that had been rubbed with the sores of plague victims. It went downhill from there.

As an assault by papal forces became inevitable, Caterina snuck out of Forlì with a small company of soldiers on Christmas Day, 1499, and journeyed to Monteriggioni, seeking armed support from Ezio Auditore.

Retrieved from "https://assassinscreed.fandom.com/wiki/Database:_Caterina_Sforza_(Brotherhood)?oldid=833401"
Community content is available under CC-BY-SA unless otherwise noted.