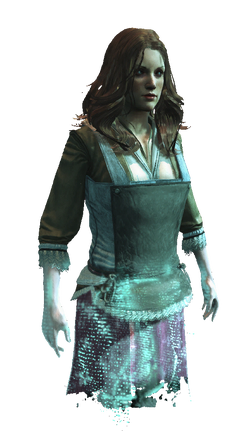 Daughter of Emmett and Elizabeth Scott, Caroline was born in Bristol, England, to a prosperous family of merchants and civil servants. Given a modest education by her father, she furthered her own studies in her own way, taking time to read as often as her familiar duties allowed. Splitting her time between this and helping her mother manage her father's affairs, she grew into a confident and level-headed woman with more skill and intelligence than her situation allowed her to exercise.

Caroline first met Edward Kenway outside the Auld Shillelagh, in the aftermath of a drunken altercation. She had arrived to fetch one of her servants and there found Edward escorting the woman from the clutches of one of Bristol's more notorious cads. Thankful for his kindness, Caroline agreed to a second meeting on more equitable terms, hardly thinking a romance possible.

And yet -- against all odds -- that is just what happened. Edward and Caroline grew quite close, and soon fell in love, quite much to the dismay of her father. Emmett Scott had already promised his daughter to the son of a wealthy East India Company executive, and made his displeasure apparent at every turn. But all his noise was to no avail. Caroline and Edward were married in 1712.

For a time it seemed as though this odd pairing might produce a lasting union. But Edward's deep love for his wife was offset by his uncouth habits and reckless attention to responsibility. Not content to live a life of middle class drudgery, Edward dreamed large, and fixed on the idea that he could sail to the West Indies and fight as a Privateer against the Spanish. Or, barring that, buy some land and sow a sugar plantation. Caroline tried to dissuade her husband, but to no effect.

At last his drunken antics and wild dreams strained their marriage beyond repair. To further complicate matters, Caroline discovered she was pregnant, and could not fathom Edward being a responsible father to their child. She resolved then to leave her husband and live again with her parents. Edward was hurt by the idea, but the shock of it did nothing to cure his fantasies. Instead he doubled down, and left for the New World, vowing to prove himself a man of quality.

Caroline had her child some months after Edward's departure, calling the girl Jennifer. In the ensuing years, Caroline lived a life that alternated between great joy and crushing grief. She had a beautiful daughter and a supportive mother, yet her father -- ever resentful for Caroline's defiance -- never treated her as a daughter again.

In early 1720 tragedy struck with a slow but deadly force -- Caroline fell ill, and for many months languished at her parent's home, desperate to get well. Emmett Scott, believing his daughter's illness to be self-induced, did little to aid her. Unfortunately, the disease was all too real. Caroline Scott Kenway died in 1720 in her parents' home on Hawkins Lane, in Bristol.

Retrieved from "https://assassinscreed.fandom.com/wiki/Database:_Caroline_Scott?oldid=718559"
Community content is available under CC-BY-SA unless otherwise noted.