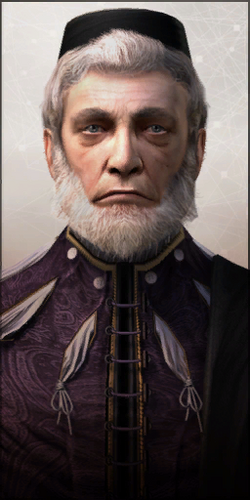 Carlo Grimaldi
Date of Birth: 1458.
Profession: Noble, Member of the Council of Ten.

Carlo Grimaldi. Emerging from his palace in Monaco with a craving for political power, Carlo quickly became a key guest at the tables of the Venetian nobility, while his reputation for discretion earned him entrance into the back rooms.

Here's how the old bastard ended up in the Council of Ten. While visiting the head of the council, Ignazio Contarini, Carlo ran into Ignazio's daughter. Desperate for help, and aware of Carlo's trustworthy reputation, she confided in him.

Her father ad arranged her marriage, but she wanted to run away with the son of one of the servants. They'd been in love since they were children, and they planned to start a new life in Milan, where they could be free of her father.

Carlo suggested immediate action: an escape by ship that night. The two lovers followed his instructions, and, as they climbed the gangplank, they were free! That is... until Ignazio appeared on deck.

Carlo was rewarded for his loyalty to the Contarini family, while true love... well, see for yourself.

Retrieved from "https://assassinscreed.fandom.com/wiki/Database:_Carlo_Grimaldi?oldid=881408"
Community content is available under CC-BY-SA unless otherwise noted.