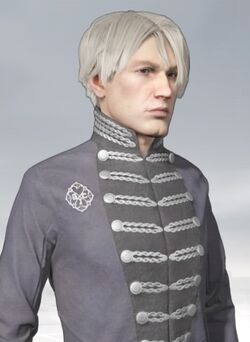 Born and raised in India to English missionary parents, Brinley has always believed in the cause. His parents, as they preached, lived by the sole mission to convert the Indians are restore peace to the newly conquered colonies. In 1848 a young boy, Duleep Singh, was placed in a neighbour family. Brinley felt himself to be a little jealous of everyone calling him "the Prince". Brinley's father, Franklin Ellsworth, gave his son the task of watching over the young Maharaja. The two spent a lot of time together as Brinley showed him the rules of the compound, and the two became fast friends. But soon Duleep had to leave for England, and Brinley was alone again. Brinley continued his education in India, and apprenticed under a government official of the British India Company when he came of age. Before long, Brinley wore a cross of honor on his chest. His new duties included planning to stop another rebellion, should is arise, and any means of "keeping the peace" and the English in control. In 1868, Brinley was sent word from England requesting his help. "The Templar Order will fall", said the letter, "and the Black Prince will no longer contained. Your presence is required in England. D. S. must be the last Maharaja. It is your sacred duty."

Retrieved from "https://assassinscreed.fandom.com/wiki/Database:_Brinley_Ellsworth?oldid=880788"
Community content is available under CC-BY-SA unless otherwise noted.