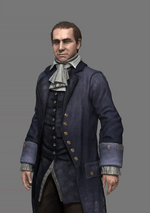 Benjamin Tallmadge was the head of Intelligence for the Continental Army during the Revolutionary War. The British, of course, would have called that an oxymoron.

Tallmadge was originally from New York, but moved to Connecticut before the revolution broke out. He served as a Lieutenant, and then a Major in the militia, before being asked by George Washington to lead the intelligence department. Tallmadge used his contacts in New York to form the Culper Ring - a league of spies that observed and reported on the British actions in New York. It's possible his contacts also discovered Benedict Arnold's treachery, but that's disputed.

After the war, Tallmadge returned to Connecticut, where he became a merchant - and politician. He was elected to the House of Representatives in 1801.

Retrieved from "https://assassinscreed.fandom.com/wiki/Database:_Benjamin_Tallmadge?oldid=666675"
Community content is available under CC-BY-SA unless otherwise noted.