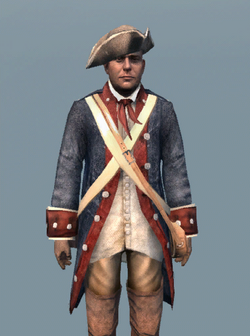 Benedict Arnold was a General in the American Revolution, and America's best-known traitor, though I'm not sure that's what he would have had printed on his business cards. Arnold also happens to be a war hero on the American side, though many people don't know that.

Before Arnold turned traitor, he had a reputation both for bravery and for genuinely caring for the soldiers who served under him. He was instrumental to the rebel capture of Fort Ticonderoga in May of 1775, and his leg was crippled during the Battle of Saratoga in 1777. So he certainly put the effort in.

Unfortunately, his career advancement was spotty - he had a habit of getting into arguments with his superior officers, which is usually not a good move if you want a promotion. While George Washington recommended him for various commands, other officers had no use for him.

When Arnold was given command of West Point in 1780, he promptly tried to turn it over to the British in exchange for £20,000 and a commission as a Brigadier General. That's the spirit! The conspiracy was uncovered before Arnold could actually betray the fort - and he fled north.

Nobody knows for certain why Arnold betrayed the Americans. His frustrations in being passed over for promotion obviously had something to do with it. But there's also speculation that Arnold had significant debts - the money he'd been promised would be sure to settle that.

Unfortunately for him, he never received the promised cash - or at least, not all of it. Since the British didn't actually capture West Point, Arnold only received £6,000. And while he did become a Brigadier General as promised, nobody trusted him - once a traitor, always a traitor.

Retrieved from "https://assassinscreed.fandom.com/wiki/Database:_Benedict_Arnold?oldid=804241"
Community content is available under CC-BY-SA unless otherwise noted.