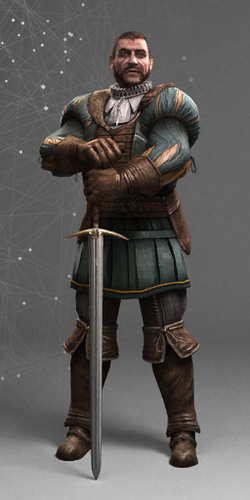 Born in the town of Alviano in Central Italy, Bartolomeo grew up to be a clever and resourceful soldier. After spending years in Venice, during which he aided Ezio Auditore in his campaign against Silvio Barbarigo and Dante Moro at the Arsenal, Bartolomeo joined the Orsini family in 1496 to fight against the Pope and Cesare, who were attempting to seize Orsini territory.

A few years before Cesare had him killed, the Pope's eldest son, Juan Borgia, the Duke of Gandia, waged an inept campaign against them. At one point during the siege of Bracciano, Bartolomeo sent an ass out of the gates with a sign around its neck reading: "Let me go for I am an ambassador to the Duke of Gandia". The letter roped to its tail contained further insults.

After his victory at Bracciano, Bartolomeo moved to Rome and remarried. Yes, Pantasilea Baglioni was not Bartolomeo's first wife. Oddly enough, he originally paired up with his nominal doppelgänger Bartolomea Orsini, who died during the Borgia assault in 1497. He married Pantasilea the same year and immediately became entangled in a battle with the French faction of Cesare's army, led by the Baron de Valois. Just goes to show that wives may come and go, but battles are forever.

At the end of 1503, Bartolomeo left Rome after being hired by Ferdinand II of Spain to help the Spanish army defeat the French and seize the Kingdom of Naples. The following year, he defeated Maximilian I, the Holy Roman Emperor, taking Trieste and Gorizia. Impressed, Venice elected him to the office of Governor General.

Everything was coming up roses for Bartolomeo, until the disastrous Battle of Agnadello in 1509, when he disobeyed orders to avoid combat and directly attacked the French army.

The battle was lost, Bartolomeo was captured and wounded by the French, and the Venetians lost Lombardy, a province it had taken them "eight hundred years exertion to conquer".

Furious, Venice refused to help Bartolomeo despite his claim that the French commander had stolen "a priceless Venetian artefact" which he was attempting to rescue.

Bartolomeo was kept in French prison until 1513. But the French, as we all know, are very forgiving. He was sprung from jail to fight for them, managing to defeat the Swiss with only 300 men in 1515.

Later the same year, once restored to his former glory as General of the Venetian Army, he was killed besieging Brescia.

Venice welcomed his body home with a grand ceremony and buried him in the chuch of Santo Stefano.

Retrieved from "https://assassinscreed.fandom.com/wiki/Database:_Bartolomeo_d%27Alviano_(Brotherhood)?oldid=806759"
Community content is available under CC-BY-SA unless otherwise noted.