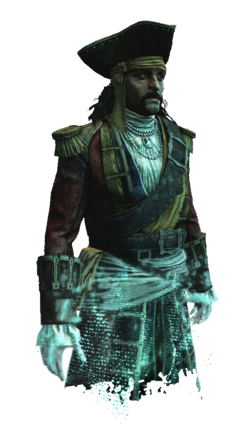 Originally hailing from Wales, little is known about John Roberts, the real name of the man who would come to be known as "Black Bart" long after his death.

Most assume he went to sea at a very young age -- at 13 or so -- but there is no record of him in any historical documents until his noted appearance in 1718 aboard a merchant's ship, Barbadian in origin. Just a year later our picture of Robert's life sharpens considerably. We now know he was pressed into piracy by the notorious Howell Davis while working aboard a slave ship under Captain Abraham Plumb. And though Roberts had likely not gone to sea with the intent of becoming a pirate, when the opportunity thrust itself upon him Roberts was reported to have said 'A merry life, and a short one shall be my motto.'

A few months later Davis was killed in an ambush on the Portuguese Island of Principe, and Roberts was swiftly and unanimously elected to replace him. This was surely a testament to the man's natural charisma and leadership, for he had been a pirate only a few months. It was at this point he took the name "Bartholomew", likely naming himself for the infamous Bartholomew Sharpe, a pirate of some renown who had disappeared just two decades earlier.

One of the most intelligent and strategic pirates of the Golden Age, Roberts was a sturdy, handsome man, known to dress in fine clothes. A handsome man, who carried himself with a dignified but unpretentious air, he had dark hair to match his dark complexion, likely set from the almost two decades he had spent at sea. He often carried numerous pistols, each tied to one end of long silk sashes, which he kept slung over his shoulder.

His tactical ideas were usually radical, but thoughtfully considered. He never jumped into any scheme rashly, though his ideas seemed almost suicidal to those unacquainted with his methods. Ultimately responsible for the theft of around 400 ships in his 3 year career, he bested every other pirate of the era by a factor of 10 times or more, although it must be said that at least half of these boats were small perigees and the like.

Roberts' boldest gambit by far was the theft of a fully laden treasure ship taken from a fully armed and manned fleet of 42 docked Portuguese ships. As the story goes, Roberts flew false colors, sailed among the anchored ships until he found a skittish officer to take hostage. Threatening the man with death, he asked where the most valuable ship was moored. When the young man pointed it out, Roberts sailed there, quietly commandeered the ship for his own, and sailed away without any of the other 40 ships being aware of what had transpired.

Roberts was not opposed to slavery, but he had a more open policy about African men working freely on his ship. Nevertheless, he did occasionally trade slaves too when economically necessary, and - most notoriously - he burned a slave ship with 80 men chained below deck simply because he was being pursued and had no room to take the slaves aboard.

Shortly after this incident, Roberts was tracked by British authorities to the West Coast of Africa, not many miles from where he had begun his career as a captain. Ambushed by those who wanted him dead, Roberts was reported to have dressed in his finest clothes before stepping out onto the deck of his ship, directly into a hail of cannon fire and grapeshot. In a flurry of projectiles, Robert's throat was torn out. He slumped to the deck, coming to rest against one of his cannons, and quietly bled to death.

His crew, believing he was resting, reprimanded their captain before discovering his true fate. When they realized he was dead, they picked his body up and tossed it into the ocean, giving him a proper sailor's burial and denying any British ideas to cart his body home and put it on display. Thus, with a quiet splash, ended the boisterous career of brash and bold Bartholomew "Black Bart" Roberts.

Retrieved from "https://assassinscreed.fandom.com/wiki/Database:_Bartholomew_%22Black_Bart%22_Roberts?oldid=718556"
Community content is available under CC-BY-SA unless otherwise noted.