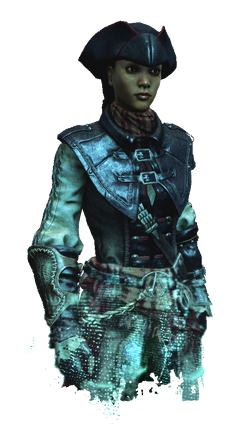 Aveline de Grandpré was born on June 20 in New Orleans to a wealthy French merchant and his placée.

When Aveline was just ten years old, her mother disappeared, leaving her in the care of her stepmother.

At some point, Aveline was approached by Agaté, an Assassin mentor, who trained her in secret to kill on his order.

Following her father’s death, she disappeared from New Orleans for several years, during which time it was unclear where her loyalties lay.

By 1784, she was again performing Assassin missions, sometimes at the request of Connor Kenway, whom she counted as a friend.

Retrieved from "https://assassinscreed.fandom.com/wiki/Database:_Aveline_de_Grandpr%C3%A9_(Black_Flag)?oldid=718555"
Community content is available under CC-BY-SA unless otherwise noted.