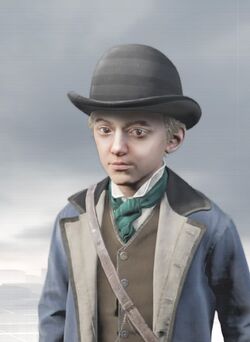 Born in Edinburgh, Scotland, young Arthur left at the tender age of nine for Hodder Place, Stonyhurst preparatory school in England. Unrecorded in all but the most painstaking biographies is his short sojourn in London, where he first came to appreciate the deductive arts in complicity with a mysterious pair of twins. He continued his education at Stonyhurst, later to return to Scotland where he earned a medical degree at the University of Edinburgh.

Doyle served as ship's doctor on expeditions to both the Arctic Circle and Africa before settling in Plymouth, then Portsmouth, England, giving up his medical career to struggle as a writer (and play goalkeeper for an amateur football club). He eventually moved to Upper Wimpole Street, London, where he began to compose a series of mystery novels featuring a tweedy detective.

Doyle became increasingly interested in spritualism (possibly due to the sensational murder of the psychic Thaddeus the Amazing during Doyle's stay in London), and, following the death of his first wife joined the famous Ghost Club. He also believed in fairies.

Retrieved from "https://assassinscreed.fandom.com/wiki/Database:_Arthur_Conan_Doyle?oldid=843890"
Community content is available under CC-BY-SA unless otherwise noted.