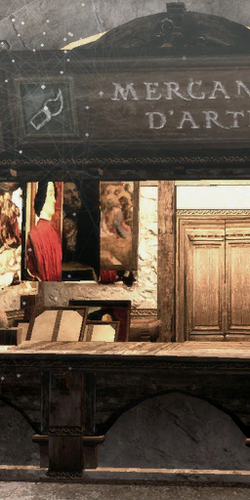 The shops of Renaissance artists were usually small, and dealt mainly in religious decorations for churches or homes. Artists were not considered visionaries as they are today, but were treated merely as craftsmen, just like carpenters and blacksmiths. The production of art was usually cooperative.

The head of the shop was the master, who received commissions and oversaw the assembly of the painting. He was expected to be a businessman and turn a profit, usually creating copies of whatever religious paintings were in vogue at the time.

If you take a close look at the holy scenes most arists were forced to paint, the great works attempt to overcome their subject matter to express intangible truth about emotion, life and love.

Retrieved from "https://assassinscreed.fandom.com/wiki/Database:_Art_Merchants_(Brotherhood)?oldid=806769"
Community content is available under CC-BY-SA unless otherwise noted.