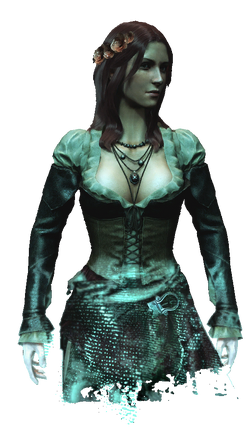 Anne was barely a teen when she left her native Cork in Ireland for the British colonies, and by sixteen she was en route to West Indies at side of her new husband, Mr. Jack Bonny, a gentle but sturdy young man in his early 20s.

The pair arrived in Nassau in April of 1716, settling down with an unclear idea of what shape their lives might take. Jack eventually found work on one of the small plantations there, while Anne cultivated her ability to loaf and daydream. Unfortunately, her beauty, aloofness, and her incredible indifference to propriety made her the object of more romantic attention than she had ever known or cared for.

Within a year of arriving in Nassau, the Bonnys' marriage was in shambles, a union only in name. While Jack disappeared further into his work, Anne grew more confident and sociable, eventually taking a job as a barmaid at the popular Old Avery tavern in the center of Nassau. And though she took on a few lovers in the next few years, it was mostly out of envy and spite that the rabble of Nassau branded Anne a harlot and a tease. But with no high society to shun or shame her, Anne's desirability only increased on the strength of these rumors.

(Note: Tread VERY carefully here. And triple-check any racy footage you get. 18 or older, no exceptions. -OG)

After living and working in Nassau to no great purpose, Anne eventually fell for the roguish charms of "Calico" Jack Rackham. A man who had already fallen into and out of piracy, Rackham was just the sort of character to lure Anne away from her dull marriage.

It was also around this time that Anne befriended Mary Read, whose manly disguise she had seen right through. The two grew to be close friends, much to the consternation of Rackham, who threatened Mary with violence for flirting with his prize. Mary, to diffuse the situation, revealed herself to Rackham too... much to his delight no doubt.

A few months later, for reasons not entirely clear, Anne, Mary and Rackham raised a small crew, slipped aboard a marooned schooner, and sailed from Nassau's port under cover of darkness. Their goal was to execute a series of swift robberies before retiring with enough gold to live on, but once again Rackham's incompetence proved disastrous.

Within 3 months of setting out, Anne and Mary found themselves alone on the deck of their stolen, damaged schooner, fighting off waves of British soldiers as Jack and the rest of his crew lay below deck, passed out from a heavy night of drinking. They were outnumbered, and quickly detained. The British authorities, surprised to find two women fighting so fiercely as pirates, deigned to make a show of their subsequent trial. But Anne and Mary had a plan of their own. Unbeknownst to the British, both were pregnant -- Anne by Rackham, most likely, and Mary by an unnamed sailor -- a fact which they revealed just as the judge passed a sentence of execution on them.

Owing to the fact of them being "quick with child", the judge stayed their executions until the came to term. Some 4 months later, Mary had her child, but died soon after in prison of a terrible infection. Until now Anne's fate was unknown... lacking an execution log or death certificate, it was commonly assumed that her father came to her rescue, paying the Governor off and spiriting her back to the British colonies in North America. But we now know the true story. The only questions remains is: what to do with it?

Retrieved from "https://assassinscreed.fandom.com/wiki/Database:_Anne_Bonny?oldid=718552"
Community content is available under CC-BY-SA unless otherwise noted.