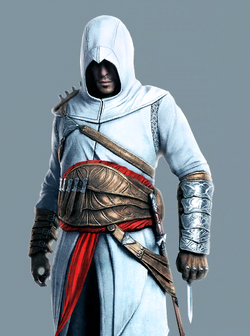 Altaïr was born into the Assassin Brotherhood, in the stronghold of Masyaf. His early life wasn't a happy one - his mother died during childbirth. Then, when he was a young boy, his father was killed during the first siege of Masyaf. Only shortly thereafter the Assassin he died to save committed suicide in front of the 11-year-old Altaïr.

With his parents gone, Altaïr looked to Al Mualim - the then-Mentor of the order - as a father figure. Al Mualim recognized Altaïr's potential, and took on his training personally. Altaïr reached rank of Master Assassin by the age of 25 - an unheard-of accomplishment. If there was an Assassin Book of Records, there'd probably be a picture of this fella on the front.

Altaïr was one of the best fighters in Assassin history - with an arrogance to match. After a disastrous mission in 1191 in which he broke the creed and very nearly let an Apple of Eden fall into Templar hands, Altaïr was sent back down to novice rank and forced to begin again.

As part of his rehabilitation, he was responsible for taking out the major players in the Templar order at the time, including the Grand Master Robert de Sablé. Tragically, in the end he was also forced to kill Al Mualim, who turned out to be both a Templar, and corrupted by the influence of the Apple. After his mentor's death, Altaïr took control of the order, turning it into the secret - and world-spanning - organization it is today.

One of the things that made Altaïr such a deadly Assassin was something we now call "Eagle Vision", a kind of sixth sense inherited from the First Civilization. It allowed him to read his enemies and surroundings in a way that goes beyond what the human eye can see. Of course, you'll know more about that than me (I can't believe I just typed that) because it's in your blood, and that's part of why you're here.

Well, let's be honest. You knew you weren't here because of my enduring affection, or my warm and passionate cuddles.

Retrieved from "https://assassinscreed.fandom.com/wiki/Database:_Alta%C3%AFr_Ibn-La%27Ahad_(Assassin%27s_Creed_III)?oldid=804227"
Community content is available under CC-BY-SA unless otherwise noted.