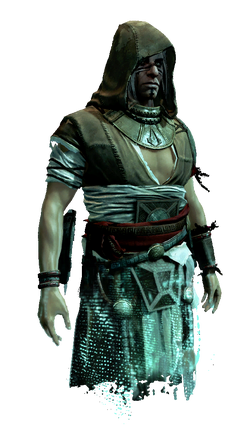 Named for the Mayan god of hunting, Ah Tabai's given name remains a mystery, and very little is known about his earliest decades. We are still searching for a direct descendant, but fear this will be impossible - the only child he is known to have fathered died before the age of ten.

(Note: A ready-made tragedy, if we can find the right footage. Keep looking. -ML)

What little else we know about him comes from his own mouth; from the stories he told those who knew him. When speaking about his own past, he often avoids personal details in favor of abstractions and hints. He frequently speaks of his love and admiration for the tragic history of his people, and often used these stories to illustrate the complex intersections of cultures and religions, frequently pointing out the fact that "From within and without come enemies and allies alike. Nothing in life is guaranteed, except surprise..."

(Note: Aloof Mentor figures can work, but only if they have a soft side. A redemptive moment. -DM)

It is not known how early Ah Tabai acquired the title of Mentor, nor how large his impact was on the Assassins of the West Indies. We do know, however, that he maintained semi-regular contact with the Assassins in the British colonies to the north, in various parts of Europe and Africa, and in China. We also know that he was instrumental in opening his branch to men and women from all walks of life - mostly Europeans, Africans, and those Native to the area.

As a native Mayan himself, rumors and stories of the ancient Observatory were not foreign to Ah Tabai. So, in 1713, rumors of a new "Sage" began to surface, Ah Tabai took it upon himself to locate this man for himself, believing the Assassins should be the protectors of this ancient and mysterious place. Ah Tabai sent word far and wide, to as many Assassin outposts as possible, hoping their network of spies and informants would lead them to their prize. But after two words, there was no word.

Then, at some point in early 1715, an experienced British Assassin named Duncan Walpole arrived at Ah Tabai's encampment, initially expressing a desire to train under the Mentor directly. Ah Tabai found the request odd but flattering, for Walpole had already achieved a level of Mastery few assassins ever reached. But after many months of intensive training, Ah Tabai came to consider Duncan Walpole as one of his most trusted colleagues. (Training montage. Would love this footage. -ML)

Then in June of 1715, word arrived that the Templars had located and imprisoned the Sage on Spanish lands in the far south. Seeing an opportunity to cripple his arch-enemies, Ah Tabai entrusted Duncan Walpole with the task of rallying various Assassins around the West Indies and leading an assault on the Templar prison ship en route to Havana. Duncan Walpole agreed to this task... and was never heard from again.

It was only after Edward Kenway's disastrous meddling in Havana that Ah Tabai was made aware of the full extent of Walpole's betrayal.

Retrieved from "https://assassinscreed.fandom.com/wiki/Database:_Ah_Tabai_(Black_Flag)?oldid=786613"
Community content is available under CC-BY-SA unless otherwise noted.