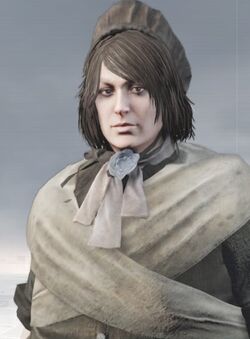 Daughter to a homemaker and an ironworker, Agnes MacBean was born in Garnkirk, Scotland. The eldest of six, Agnes quickly grew into her robust, outspoken character, bossing her younger siblings about and giving her parents a run for their money.

In 1831, Scotland began construction of its very own railway system: the Garnkirk and Glasgow lines. Her father, Mungo MacBean, being an expert in the field, was sent to work in the rail yards. Aspiring to be more like her father, Agnes learned what she could about trains and how they worked and hoped to one day follow in Mungo's footsteps.

Three years later, Agnes had her chance. Mungo's sudden ill health coincided with the merging of the Scottish and English rail lines (though it would take an imaginative conspiracy theorist to link the two), and Agnes, for the benefit of her family, took her father's place inside his locomotive. More unusually, however, and to speed the transition, she took on his identity, as well.

Two years later, following an incident, Agnes was discovered to be a woman and, in punishment, transferred to Starrick Industries. There, she was placed under the employment of the cruel Whitechapel Gang Leader Rexford Kaylock, and her train in his illegal service.

In 1868, her train, dubbed "Bertha," was hijacked by Assassin twins Jacob and Evie Frye. Bargaining with them for their assistance in getting better work conditions for herself and her peers, she offered her services.

Retrieved from "https://assassinscreed.fandom.com/wiki/Database:_Agnes_MacBean?oldid=880800"
Community content is available under CC-BY-SA unless otherwise noted.