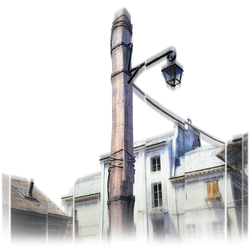 Before official authorities instituted the use of the guillotine during the Revolution, the mob improvised rough justice on their own. Often, simple lamp-posts ("lanternes") were used to summarily hang the victim. The most famous lamp-post was found in the Place de Grève in front of the Hôtel de Ville. It was here in 1789 that the crowd strung up the hated Joseph-François Foulon de Doué, who was suspected of controlling the food supply. After his execution. "À la lanterne" became a famous cry and is found in the most popular song of the day, "ça ira!" *
--
* I think it gives us great insight into the French that one of their most popular songs is about a lamp-post.
--
It was also the subject of one of Camille Desmoulins' most recognized polemics.

Retrieved from "https://assassinscreed.fandom.com/wiki/Database:_%C3%80_la_lanterne!?oldid=876616"
Community content is available under CC-BY-SA unless otherwise noted.