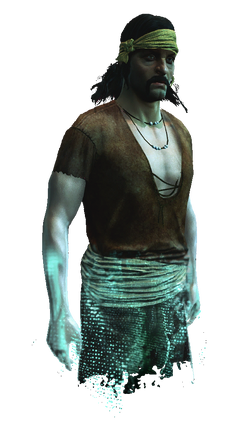 Abstergo's archives contain a few references to men called "The Sage" or "A Sage", but they are few and far between. Each citing seems to refer to a different person living in a vastly different time and location. The earliest example was found in a Sumerian clay tablet in cuneiform script, while the latest survives only as a footnote in one of Laureano Torres's own journals, dated January 1704. In all – according to Abstergo's existing research – seven different "Sages" seem to have graced the world's stage in the past twelve hundred years. But the real number is likely higher.

Perhaps, the strangest aspect connecting each of these various sightings is the fact that, in every case, visual descriptions of each Sage are remarkably similar. So similar, in fact, that one wouldn't be faulted for assuming they ware talking about a single, immortal man. However, in two of the seven citiations, explicit mention is made of their death and burial. Are we therefor dealing with some bizarre form of reincarnation? Or some simpler explanation that eludes us at present? More research is required.

Thanks in large part to a series of letters acquired through the efforts of our researchers, we now have some sense of what constitutes a "Sage".

It appears that such a person, always a man, is the result of a bizarre experiment perpetrated by "Juno", one of the luminaries of the so-called "First Civilization," with the aid of her husband "Aita". Apparently using her husband's DNA as a base, Juno manipulated this genetic material to create a program that she then inserted as "junk DNA" into the Human genome.

Though harmless by all appearances, this program could -- under the right circumstances -- activate suddenly during the conception of a human child and, quite literally, reconfigure itself into the genome of her husband. In this way, a near perfect replica or clone of this man's personality and intelligence, with all its memories intact, would appear in lieu of the actual child that should have resulted from this union.

It is unknown at this point why Juno should have wanted her husband's likeness to continually recur throughout the centuries and millennia, especially in light of the First Civilization's swift extinction barely 100 years after Juno and her kind walked the earth. Yet it remains a sobering fact that there is a very high probability that one such replica of this "Aita" is alive and walking the earth at this very moment.

Retrieved from "https://assassinscreed.fandom.com/wiki/Database:_%22The_Sage%22?oldid=718637"
Community content is available under CC-BY-SA unless otherwise noted.