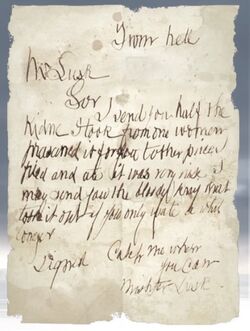 'From Hell' letter
On October 16th George Lusk, the president of the Whitechapel Vigilance Committee, received a three-inch-square cardboard box in his mail. Inside was half a human kidney preserved in wine, along with the following letter. Medical reports carried out by Dr. Openshaw found the kidney to be very similar to the one removed from Catherine Eddowes, though his findings were inconclusive either way. The letter read as follows:
(Transcription)

"From hell.
Mr Lusk, Sor I send you half the Kidne I took from one woman and prasarved it for you tother piece
I fried and ate it was very nise. I may send you the bloody knif that took it out if you only wate a whil longer signed
Catch me when you can Mishter Lusk"

Retrieved from "https://assassinscreed.fandom.com/wiki/Database:_%22From_Hell%22_Letter?oldid=884062"
Community content is available under CC-BY-SA unless otherwise noted.