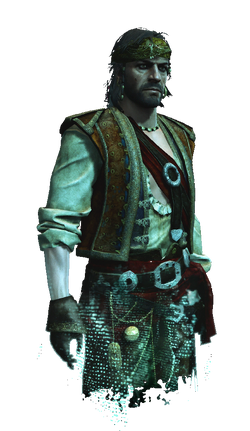 Of the few infamous pirates to call the West Indies his birthplace, Jack Rackham was born in Jamaica at the height of Port Royal's boom as a den of scoundrels. This would likely explain his atrophied moral compass, for he was frequently drunk, rarely serious about anything, and always chasing women. He used his outrageous and offensive charm to keep out of most trouble. But a strategist and fighter he was not.

Nicknamed "Calico" for his affinity for Indian and Asian prints, he was a terrible sailor and a worse pirate, given to flights of fancy and myopic ideas that served only himself, rather than solid strategic thinking. He was likely drunk for half of his adulthood, and had a weakness for women that trumped all basic needs, such as sleeping or eating. His disarming charm, dashing good looks, and his swift wit carried him far, but parties can only last so long before someone has to clean up after them.

After marooning Charles Vane and leaving his former captain with a small, shattered vessel, Rackham knocked about the West Indies for barely 2 months before returning to Nassau and accepting the King's pardon from Governor Rogers. Was it boredom that brought him back? Or the affections of a lady he sought?

Quite possibly the latter, for he soon found himself involved with another man's wife – the fetching Anne Bonny, a woman 20 years his junior. When their relationship was discovered, Anne's husband was so appalled by his wife's infidelity that he tried to have her arrested and whipped. Rackham offered to pay for a divorce but the husband would not hear of it.

At their wit's end, Anne and Jack decided to elope and return to the sea as pirates. Joining their crew was Mary Read, still passing as a man. Together the three set off in search of a fresh ship of freedom. But they did not get far. Within 4 months of their flight from Nassau, they were captured by authorities and brought to trial. Jack was kept in a prison in Jamaica, perhaps in a cell near his old rival Charles Vane.

A few weeks later he was hanged, and his body gibbeted just outside Port Royal on a small islet now called "Rackham's Cay".

Retrieved from "https://assassinscreed.fandom.com/wiki/Database:_%22Calico%22_Jack_Rackham?oldid=718558"
Community content is available under CC-BY-SA unless otherwise noted.