Artabanus [1] was a Persian elite and the assassin of King Xerxes I of Persia.

Considered to be one of the very first proto-Assassins, active during the 5th century BCE–several centuries before the Brotherhood's formal establishment–Artabanus fought to ensure Persia would forever remain free of tyranny. His assassination of Xerxes I was the first recorded usage of the Hidden Blade, which would later on become the iconic weapon of the Assassin Brotherhood.

After the defeat of the Tempest in Achaia, Artabanus decided to settle down in the region with his son Natakas, who developed a relationship with the Spartan misthios Kassandra. Artabanus became a grandfather to Natakas and Kassandra's son, Elpidios, and later the ancestor of one of the Hidden Ones' founders, Aya.

"We – we trusted him! Loved him! We were all as brothers, but he drew his blade against us! Did you not consider the cost? They'd be alive. Your mother, your siblings... He may as well have killed them himself."
―A dying Pactyas to Natakas on Artabanus's past, c. 422 BCE[src]-[m]

During the 5th century BCE, the Order of the Ancients supported the reign and conquests of the Achaemenid kings Darius I and his son Xerxes I.[2] Opposing the Persian kings' tyranny over the people, Artabanus and his allies, Amorges and Pactyas, assassinated King Xerxes I, with Darius striking the killing blow using the Hidden Blade in August 465 BCE in what would become the first recorded use of the Assassins' iconic weapon.[3][4][5] At one point, Artabanus also fathered two children, Natakas and Neema.[6]

After Xerxes I's son Artaxerxes I ascended the throne, Artabanus feared he would too be manipulated by the Order and thus plotted his assassination as a preemptive measure. However, his close friend, Amorges, opposed his decision and later joined the Order of the Ancients in order to prevent the killing. Artabanus was confronted by Amorges, who called for the guards. As a result, Artabanus was branded a traitor and fled Persia with his family, while being pursued by the Order.[1]

When the Order failed to manipulate Artaxerxes I to their side, they sought to have him dethroned and assassinated. Taking advantage of Artabanus' status as a fugitive, they used his name as a guise for the assassination,[7] working with Artaxerxes' brother Hystaspes. The assassin, using the guise of Artabanus, poisoned the young king, taking the man's sight, but was unsuccessful in his assassination attempt. Artaxerxes later spread the tale that Artabanus had succeeded, so that he might safely escape Persia.[8]

During their escape from Persia, Artabanus lost both his wife and Neema to the Order, eventually fleeing to Greece with only Natakas by his side. By the time of the Peloponnesian War, they managed to flee and sought refuge in an abandoned tomb in Makedonia.[9] However, they would not be safe for long as the Order soon sent a branch, the Order of Hunters, to track them down.[6]

Around 429 BCE, Artabanus, Natakas, and Kassandra worked to eliminate the Order of Hunters–a branch of the Order of the Ancients dedicated to eliminating those they considered "Tainted Ones"–and their presence in Makedonia. In this, they were successful, and Pactyas was killed. Shortly thereafter Artabanus and Natakas made plans to leave Makedonia.[1]

Artabanus and Natakas later sought refuge in Achaia, where they hope to travel further east using a ship from the port city of Patrai. Shortly after their arrival, a naval fleet soon began to blockade the port city, halting their plans to leave Greece. Fearing that the Order may be responsible, Artabanus sent a letter to Kassandra, seeking her help once again.[10]

Artabanus and Kassandra joined forces and eventually defeated the Order of the Storm and its Magi Phila. Deciding not to run any longer, he and Natakas settled down in Dyme, where Natakas developed a romantic relationship with Kassandra. This led to the birth of Elpidios, making Artabanus a grandfather.[11]

Despite their efforts, Artabanus and his family became hunted once again, this time by the Order of Dominion who set fire to their village. Artabanus and Kassandra returned to the torched village, where they were greeted by Amorges. After the Ancients leader made his intention of endangering Natakas and Elpidios known, Artabanus sent Kassandra to rescue them while he himself serve as a bait to allow them to escape.[12]

Artabanus was able to eliminate a few Persian soldiers before being ultimately overwhelmed. Before he was about to be killed by the soldiers, he was rescued by Kassandra who fought off and eliminated the Immortals. However, this gave the Order the chance to kill Natakas and take the baby away. Having lost his son, Artabanus traveled down south to Messenia to hunt the Order, leaving Kassandra behind.[12]

Kassandra later joined him in the town of Aipeia, where they devised a plan to dismantle the Order's operations in the region and lure out Amorges.[13] Recruiting an Athenian general and eliminating several members of the Order, Artabanus and Kassandra launched an attack on the Andania Mine from Messene before confronting Amorges at the Temple of Zeus above the mine. Artabanus pushed Amorges off the cliff, which mortally wounded him. Before succumbing to his wounds, Amorges revealed Elpidios' whereabouts and patched up with Artabanus, stating that the Order would always be hunting them.[14]

Artabanus and Kassandra travelled south to an island of Messenia, where they were greeted by a young man carrying Elpidios, confirming Amorges' words that he would never hurt the infant. The man introduced himself as the son of King Artaxerxes I, whom Artabanus had sought to assassinate decades ago. Believing that Artaxerxes was ultimately not manipulated by the Order, Artabanus called on the man to keep Persia safe.[14]

Believing that her life as a Tainted One would be too dangerous for Elpidios, Kassandra decided to let Artabanus take him away from Greece in order to keep him safe, as the Order would always be hunting Kassandra and ones like her. In this capacity, Artabanus became a guardian to Elpidios and took him to Egypt, where he would be raised and trained in his ways.[14]

Artabanus' teachings would be passed on from generation to generation through Elpidios until his distant descendant, Aya.[14]

By 48 BCE, Artabanus' Hidden Blade wound up in the hands of the pharaoh Cleopatra, who passed it on to her protector and agent Aya. Aya eventually made one of her own and gave Artabanus' blade to her husband, the Medjay Bayek of Siwa. After the two founded the Hidden Ones, it became the signature weapon of their organization,[15] still used centuries later when their Brotherhood reformed as the Assassins.[3]

By the time of the Renaissance, Artabanus was retroactively considered an Assassin and a tomb dedicated to him was built beneath Santa Maria Novella in Florence, Italy. The Italian Assassin Ezio Auditore da Firenze explored the tomb and took the hidden seal from the tomb's sarcophagus, which later allowed him to obtain the Armor of Altaïr Ibn-La'Ahad sealed in the Sanctuary beneath Villa Auditore in Monteriggioni where a statue of Artabanus (and other celebrated Assassins) had been erected sometime before 1476.[3]

Despite his age, Artabanus had the strength and reflexes of a man half as old. According to Natakas, he never missed a day of his training regimen. He was skilled enough to match Kassandra in combat and trained with her regularly in the year or so they lived together. He was an expert at stealth, being able to appear and disappear at will, where even Kassandra couldn't track him. He preferred to work and kill silently rather than engage in open battle.[16]

The Seal of Darius 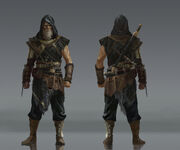 Darius outside their hideout

Darius thinking his next move

Darius facing a member of the Order of Ancients

Darius' outfit in his younger years 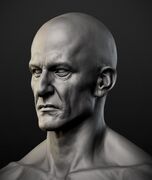 Darius' outfit in his older years

Darius as he appears in Assassin's Creed: Rebellion
Add a photo to this gallery

Retrieved from "https://assassinscreed.fandom.com/wiki/Darius?oldid=860523"
Community content is available under CC-BY-SA unless otherwise noted.