Damascus is the capital and largest ancient city of Syria, believed to have been founded in the third millennium BCE. Damascus is located in the eastern foothills of the Eastern Lebanon Mountain Range, near the delta of the Barada River.

During the Second Crusade, around 1148, the city repelled multiple attacks until being acquired by Salah Al'din in the year 1174. Upon gaining control of the city, he granted scholars from far and wide the chance to study in one of the many Madrasahs scattered throughout the city's neighborhoods. In between 1190 and 1191, the Assassin Altaïr Ibn-La'Ahad visited the city numerous times and assassinated a number of prominent Templar figures including Alaat, Tamir, Abu'l Nuqoud and Jubair al Hakim. During that time, it had an approximate population of 45,323. Since the city was virtually unaffected by the war, it remained an extremely clean and gorgeous site.[1]

In 1757, Haytham Kenway journeyed to Damascus to locate his half-sister Jenny, who had been sold into slavery in the palace of As'ad Pasha al-Azm. Haytham and Jim Holden disguised themselves as eunuchs to infiltrate the palace. However, while Haytham escaped with Jenny, Holden was captured fending off guards.[2]

The Poor District was considered to be a very busy section and constantly packed with citizens. This caused a lot of traffic throughout the streets with many civilians moving about. It was home to the sprawling and very impressive Souk Al-Silaah, which was a major trading point within the city and dominated the surrounding area. Due to its eloquent ceremonial courtyard, situated in the center, the Souk was the site where the Templar and arms dealer Tamir conducted his daily business. Strangely, though, despite Tamir having stationed multiple guards in the nearby corridors, the security around the Souk was rather light. This allowed Altaïr to silently slip in and assassinate Tamir.[1]

The Middle District contained the Sinan Pasha Mosque and Formal Gardens. These featured larger east-west thoroughfares connecting the different areas. This section of Damascus included many places of learning, until Jubair al Hakim arrived and began a city quest to destroy all written text. The central feature was Jubair's Madrasah, where he and his scholars burnt all forms of books and scrolls they had taken from the city. When Altaïr traveled there to assassinate Jubair, the security was very high, due to the Assassins' continued success.[1]

The Rich District stretched across almost half of the city, possessing many of the structural landmarks that attracted outsiders to the city. The partially rebuilt Citadel of Saladin was a key fortification that demanded planning for a successful infiltration. The most impressive feature of the district, and probably the entire city, was the Umayyad Mosque. Built by Al-Walid I in 715 CE, the mosque sat atop the ruins of the Roman Temple of Jupiter. Another renowned landmark in the district was the Merchant King's Palace.[1] The palace's interior was lightly secured, except for when the Templar and Merchant King Abu'l Nuqoud hosted one of his lavish parties. Traffic around the palace grounds was also rather light, given the location. Slightly north was the Sarouja Souk Market Quarter, where both traffic and security were moderate. Sarouja Souk held the reputation of being the largest market in the Holy Land. It was split into two separate structures that ran from west to east and north to south.[1] Though the Umayyad Mosque and Merchant King's Palace dominated the district, the Grand Courtyard north of the Mosque was equally an interesting place. Here, within the impressive district, Abu'l Nuqoud held immense power over the people.﻿[1]

Damascus was renowned for the forged steel produced there, for which the steel was named Damascus steel.[3] 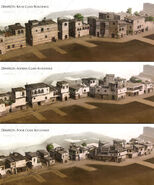