One of Anthousa's most important 'girls', Damalis was especially favored by one of her clients. Their relationship worked even with the threat of The Monger looming over Korinth, or so Damalis believed. Around 430 BCE, however, the man's behaviour changed. Not wishing to trouble Anthousa, Damalis kept her worries to herself. However, when the Spartan misthios Kassandra came to Korinth looking for her mother Myrrine, Anthousa promised her help if Kassandra in turn helped the hetaerae, and pointed her towards Damalis.[1]

After being satisfied that Kassandra wasn't working for the Monger, Damalis asked Kassandra to check on her regular customer, and try to find out why he's behavior had changed. Unbeknownst to Damalis, the Monger had been threatening her client, and pressing him to lead Damalis to a house that served as the Monger's "sex andron", with the intent to torture information about Anthousa out of her.[2]

Kassandra saved Damalis from this fate by investigating the house, and killing its caretaker before returning to Damalis and Phoibe, waiting by a statue nearby.[2]

The name of Damalis, a character in Assassin's Creed: Odyssey, is based on the Greek word δάμαλις (dámalis), which means 'calf, heifer'. 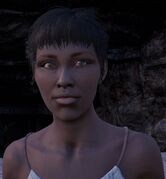 Retrieved from "https://assassinscreed.fandom.com/wiki/Damalis?oldid=889846"
Community content is available under CC-BY-SA unless otherwise noted.