Damais the Not-So-Indifferent, formerly the Indifferent, was a mercenary who operated in Attika during the Peloponnesian War.

It was a true blow to the pride of Damais's foes when they lost against him - not because he was weak, but because he didn't seem to care. As a strong, trained mercenary, it was unsure why Damais was in the trade. He fought with his all, and considered a victory just a victory, and unsatisfactory.[1]

On one occasion he bailed from a fight with a misthios, although not as a result of weakness. This, however, broke his pride and his title was forever changed from "the Indifferent" to "the Not-So-Indifferent." While his reasons for being a mercenary were unknown, Damais always fought with his all.[1]

While said conflict was ongoing, Damais crossed paths with the Spartan misthios Kassandra, who accepted the bounty contract on the former.[2] 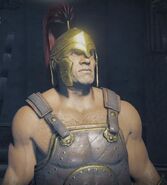