"I am not a violent man, but I ready my family's heirloom dagger. I pull my toga up into a cowl and leave for the celebration."
―Brutus preparing to assassinate Caesar, 44 BCE.[src]

The Dagger of Brutus was a short blade which belonged to the Roman senator and Hidden One Marcus Junius Brutus.

Forged from Egyptian and Roman steel, the dagger was initially in the possession of Amunet, founder of the Hidden Ones, before she gave it to Brutus after he made the decision to flee to Crete from Rome.[1]

The dagger, which was believed to be the same weapon Brutus used to kill Julius Caesar, was sealed away in an underground chamber in Rome alongside his' armor following his death in 42 BCE. In 1503 the Italian Assassin Ezio Auditore da Firenze discovered the chamber, and claimed both the dagger and the armor for his own.[2] 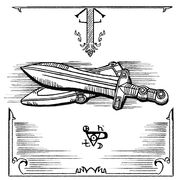 Brutus' sketch of the dagger

Brutus holding the dagger
Add a photo to this gallery

The Dagger of Brutus, a weapon in Assassin's Creed: Brotherhood, is modeled after a Roman pugio, a type of dagger used as a secondary weapon by Roman soldiers during the 1st century CE.

In Assassin's Creed: Brotherhood, whenever Ezio wields the Dagger of Brutus, enemy morale is reduced by 20 points, which means that lower-ranked guards and crossbowmen will flee after the death of only one regular guard. Also of note is that the dagger's kill animations are unique, being more brutal and violent than other short bladed weapons in the same game. One of the unique animations involves Ezio stabbing the target in a frenzy as an allusion to Julius Caesar's assassination.

Retrieved from "https://assassinscreed.fandom.com/wiki/Dagger_of_Brutus?oldid=873620"
Community content is available under CC-BY-SA unless otherwise noted.