A dagger is a short double-edge blade that can be used as a versatile weapon which can slash or stab an individual.

During the 15th and 16th century, the Assassin Ezio Auditore da Firenze could purchase a dagger from any blacksmith in Florence, Venice, Forlì, San Gimignano, or Monteriggioni.[1] During his attempt to erode the Borgia's power, Ezio could also purchase the weapon in Rome.[2] 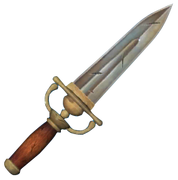 A dagger used in the Spanish Renaissance 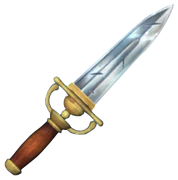 Retrieved from "https://assassinscreed.fandom.com/wiki/Dagger?oldid=899505"
Community content is available under CC-BY-SA unless otherwise noted.