Assassin's Creed Wiki
Register
Don't have an account?
Sign In
Advertisement
in: Articles that need updating, 875 deaths, Individuals,
and 5 more

Dag Nithisson (died c. 875) was a Viking from the Raven Clan who lived during the 9th century. He was a childhood friend of Sigurd Styrbjornsson.

He was known among his crewmates for telling ship stories, a fact for which they mocked him, saying he had too vivid an imagination for the tales to be real.

Early life and raid on Rygjafylke

A childhood friend of Sigurd, the son of King Styrbjorn of Fornburg, Dag was considered toughest and strongest amongst Sigurd's group of playmates, and it was believed that if Sigurd were to become the future jarl of the Raven Clan, Dag would be chosen to be his right hand man. However, this changed when King Styrbjorn adopted Eivor Varinsdottir, whose parents Varin and Rosta were killed during a raid on Heillboer by Kjotve the Cruel and the Wolf Clan. Eivor became Sigurd's adopted sister and thus his closest companion.[1] This invoked the jealousy of Dag, who believed that Eivor stole his destiny and would-be glory. Despite this, Dag kept these thoughts to himself and never told Sigurd, remaining loyal to him throughout their years together.[2]

In 870, Sigurd left Norway and embarked on a two-year voyage across Europe, leaving Dag to accompany Eivor in his stead. That year, Dag accompanied Eivor and clan-mates Tora Auzoux to the outskirts of Rygjafylke to watch as a village was raided by Kjotve's clan. Before they could formulate a proper plan, Eivor charged into battle. Dag and Tora later followed after her. After attacking the raiders, Dag was injured receiving a spear through his shoulder. When Eivor's attempt to sway the village leader to pledge allegiance to King Styrbjorn ended in his death, Eivor had Tora make sure Dag's wound was treated by the village healer. Traveling back to Stavanger with Eivor's captured slave, Gull, Dag stood by as Styrbjorn chastised Eivor for dooming them all.[3]

In 872, Dag once again joined Eivor and her crew in a botched attempt to hunt down Kjotve. The crew were captured, with Eivor to be sent to slavery in Ireland, while Dag and the rest of the crew were to be brought to Avaldsnes and sacrificed in a blood ritual. En-route, Dag was able to free himself and eliminate his captors, and was soon joined by Eivor who freed herself as well. Dag was left to seize the beaches of Avaldsnes to recover their longship while Eivor rescued the crew within the settlement.[4]

When the Raven Clan resettled the Ragnarsson's encampment as Ravensthorpe, Sigurd ordered Dag to follow Eivor's commands, much to his resentment, which only festered as Sigurd remained absent. Dag believed Eivor only sought glory for herself rather than for her jarl, as he expressed during a feast prior to an attack on Ravensthorpe by Rued's clan, and when Eivor sat in Sigurd's throne when trying to pass judgment between Holger and Rowan while Sigurd was absent in Oxenefordscire with Basim.

With his jarl kidnapped, tensions between Dag and Eivor escalated. Dag woke Eivor in the middle of the night and challenged her to a holmgang for leadership of the clan, accusing Eivor of chasing glory and not focusing on finding Sigurd. The resulting fight was Dag's last, as he refused an offer of exile and fought to his last breath.[5]

Dag is a character in Assassin's Creed: Valhalla. He is voiced by Norwegian actor David Menkin.

If players started the free Oskoreia Season event before completing the memory "A Brewing Storm", Eivor can find Dag's name and read a one-line memorial carved into the decorated longship in Ravensthorpe commemorating the deceased, as his death in unavoidable in the main storyline. 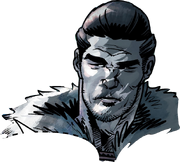 Dag as he appears in Song of Glory