"The mostly dense region of Libya around Cyrene and Apollonia, filled with Silphion plants and owned by Rome."
―Description about Cyrenaica.[src]

Cyrenaica (Greek: Kyrenaika) is the eastern coastal region of Libya. In antiquity, the region was a Greek colony founded by Battos I in the 7th century BCE, who established the city of Cyrene in the area.

By 49 BCE, control of the region was ceded to the Roman Republic which, together with Krete, formed the province of Crete and Cyrenaica.

In 47 BCE, the Medjay Bayek of Siwa travelled to Cyrenaica in pursue of the Roman general Flavius Metellus, who had secured an Apple of Eden. Along the way, he met and helped the healer Praxilla, who directed him to Cyrene to seek out her friend Diocles.[1]

In the city, Diocles directed Bayek to the Roman Akropolis where Flavius was in, allowing Bayek to assassinate the Roman general and reclaim the Apple.[1] 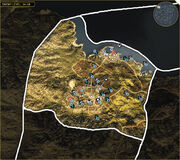