Assassin's Creed Wiki
Register
Don't have an account?
Sign In
Advertisement
in: Articles that need updating, Articles in need of sources, Cults,
and 3 more

View source
watch 02:32
Unmasking The Cult Of Kosmos In 'Assassin's Creed: Odyssey'
Do you like this video?
Play Sound

"We're political. Those who do not stand with us, stand against us. And they pay for that mistake."
―Deimos to Kassandra on the Cult's motives, 431 BCE[src]-[m]

The Cult of Kosmos was a secretive organization which operated throughout Greece in the 5th century BCE. The Cult worshipped a deity called Kosmos and plotted to control the Hellenic world from behind the scenes for their own interests. To that end, its members infiltrated every sector of Greek society, even forcing the Pythia to be their puppet. They were directly responsible for catalyzing the Peloponnesian War, which they hoped to prolong as much as possible by manipulating both sides of the conflict.

Ultimately, the Cult was entirely exterminated by the misthios Kassandra thanks in part to the machinations of their own leader, Aspasia.

"Decades ago, a group of people gathered together to uphold a theory which they believed could control the universe. That the world functioned in equal parts, order and disorder."
―Pythagoras through the Pyramid to Kassandra, 420s BCE.[src]-[m]

"The powers that be in the Greek world weren't doing things the right way. The Cult just wanted a clean slate."
―Aspasia to Kassandra, 420s BCE.[src]-[m]

By the 5th century BCE, the Cult had formed a partnership of sorts with the Order of the Ancients in Persia. Though both organizations worked independently of one another, their aims often aligned; together, they sought to install King Xerxes I of Persia as overlord in Greece,[4] and as a result the Cult supported his conquests, seeing him as a means to unite all Greece as one under his ordered rule.[3]

In 480 BCE, when Leonidas I of Sparta consulted the Pythia about going to war against the Persians, the whole Cult confronted the Spartan King, warning him not to oppose their plans. Nevertheless, Leonidas chose to disregard their threats and fight against the invaders, an act of defiance which cost him his life.[5]

Following Leonidas' defiance, the Cult grew determined to wipe out his bloodline due to its potential for interference.[3] In 446 BCE, through their manipulation of the Pythia Praxithea,[6] the Cult spread word that the youngest grandchild of Leonidas, Alexios, would bring ruin to Sparta and, as a result, the infant was sentenced to execution. Concurrently, Alexios' sister, Kassandra, tried to save her brother only to push him and the executioner over the cliff of Mount Taygetos, for which she was dropped to her death as well.[7]

The fall failed to kill the children, however. While Kassandra fled and went into exile, her mother Myrrine took Alexios to the Sanctuary of Asklepios in Argolis to seek medical aid. The priests at the sanctuary, foremost among them Mydon, did what they could for the mother and child, but ultimately convinced Myrrine that it was best to leave the badly-injured child to the mercies of the gods. She did so, and when she had turned her back to Alexios, the Cultist Chrysis took him under her wing, healed him, and raised Alexios like so many others to be a part of the Cult.[8] Alexios was subsequently renamed Deimos, and the Cult saw him as a weapon rather than just another foot soldier.[1]

Several decades later, the Cult orchestrated the Peloponnesian War in an effort to achieve control of Greece amidst the conflict of the country's two most notable poleis, Athens and Sparta. At the same time, they discovered that Kassandra was operating as a misthios on Kephallonia. Initially, the Cult desired to have Kassandra killed but Elpenor of the Eyes of Kosmos branch convinced them to instead hire her and have her assassinate her stepfather Nikolaos,[9] to avert an immediate Spartan victory over Athens. But in doing so, Elpenor exposed the Cult's existence to Kassandra, who decided to hinder the Cult's plans for control over Greece by demolishing the Cult as a whole.[3]

In 431 BCE, the Cult held their first meeting for many decades in the Sanctuary of Kosmos. Unbeknownst to them, Kassandra had also infiltrated it, and after learning of their plans for the Greek world,[1] she resolved to destroy the Cult by hunting down its members one by one to halt their schemes.[3]

Despite the Cult's attempts to remain secret, whispers and rumors about them had spread throughout Greece by the time of the Peloponnesian War. Herodotos had heard about them,[10] and some even knew about how the Cult had forced Lagos, the Archon of Arkadia, to do their bidding by holding his family hostage.[11]

Despite Kassandra eliminating the cult's leaders, remnants still remained. The philosopher Sokrates was once captured while in the process of being tried by an Athenian court, but Kassandra rescued him from a sanctuary the cult members were using as a base.[12]

The Cult of Kosmos were not polytheistic and had a deistic belief system. According to Aspasia, the nations in Greece were already chaotic and the Cult wanted to use a controlled war so as to create a clean slate on which to establish an orderly and unified Greek Nation, one where violence would be absent and the people could move towards a more rational and developing society, which would be built by the people for the people. Aspasia mentioned this would require a very wise and philosophical king.[3]

Some members of the Cult did, however, idolize and worship the people within the bloodline, truly believing them to be actual demigods, such as Deimos. The members of the Cult soon grew chaotic and greedy, and used the Chaos to earn massive amounts of profit and political power. Eventually, this led to the Cult becoming corrupted with greed and personal gain, and these individuals enabled Deimos to become their violent leader. Aspasia, while still the leader of the Cult but unable to do anything to stop them, opted to use Kassandra to help her destroy the Cult so she could resume their original goal.[3]

The Cult of Kosmos was divided into seven branches, each comprising five Adepts and led by an individual called the Sage. Serving under these leaders were arrays of soldiers who carried out their will, assassinated their enemies, protected them as bodyguards, and defended their strongholds. These cultist guards were divided into three units: guardians, vanguards, and scions. They represented warriors of standard, heavy, and agile physiques, respectively. Whereas the towering vanguards were known for their mighty strength yet sluggish pace, the scions were trained to be almost unmatched in the swiftness of their attacks. The Cult observed gender divisions in their army ranks, such that men were always trained as guardians and vanguards while the scions were exclusively women.[3] Many of these soldiers were pulled from aspiring Olympic athletes who had become addicted to mind-altering drugs that the Cult had secretly provided.[13] Despite the Cult's attempts to have an iron grip on their members, some managed to successfully abandon it, according to Myrrine.[14]

"These Masked Men, they’re organized and unafraid. Their greatest weapon is no blade; it’s our greed."
―Leiandros describing the Cult's true power.[src]-[m]

The Sages and Adepts were each provided with dark cloaks and grotesque white masks to serve as their disguises. Although they donned these when congregating,[1] they refrained from wearing them in their daily lives. In this way, they blended in with the public, concealing their allegiances to the Cult behind their regular personas.[3]

The Cultist guards, in contrast, were far more visible due to the standardization of their armor. Each soldier was clad in the Dark Steel set, consisting most prominently of a helmet which bore a fearsome mask moulded in the visage of bearded man's face. The Dark Steel Chestplate incorporated metal pteruges, and gauntlets protected the forearms. As part of their specializations, guardians were fielded with swords and shields, vanguards with large shields and heavy battleaxes, and scions with daggers.[3] The Cultist Guards were also fed with a special medical concoction which makes them stronger and more resilient than most soldiers in the Peloponnesian and Delian Leagues. [citation needed]

Sages are marked with an asterisk. (*)

Gods of the Aegean Sea

Worshippers of the Bloodline

Main article: Worshippers of the Bloodline

Heroes of the Cult

Main article: Heroes of the Cult

The Cult of Kosmos are the primary antagonists of Assassin's Creed: Odyssey.

According to The Art of Assassin's Creed: Odyssey, the Cult based their snake symbology on the myth of the giant snake Python and, as a whole, met annually to perform their rituals and discuss their plans under a giant bronze sculpture of the snake.[17] Kassandra also compared the Cult to the mythological Hydra while discussing the Cult with her mother Myrrine.[18]

Connection with the Templars

κόσμος (kosmos) is a word that stems from ancient Greek origin, and it means both 'order' and 'world', mainly because the ancient Greeks thought that the world was perfectly harmonious and impeccably put in order.

While the leaders of the Cult are dubbed Sages, this terminology does not have any connection to the Sages, the human reincarnations of Isu. The usage of the title Sage and the layout of the Cult hierarchy in the menu is possibly [citation needed] based on the Seven Sages of Greece and the Mosaic of Seven Sages on display at the National Museum of Beirut.

Each Cultist icon has up to five states: hidden (no icon), masked icon, ready to unveil, unveiled, and defeated.

The clues taken from defeated Cultists can also be read in the submenu for any Cultist they "direct" the player to but don't necessarily unveil, unless that Cultist is already "ready to unveil." The clue taken from Chrysis can direct the player to kill and loot any of the Followers of Ares to find the clue that unveils Harpalos, however it is likely the player will have already done so. In this case, only the "unveiling" clue for Harpalos can be read in his submenu, not the "directing" clue from Chrysis. On a similar note, any unveiling clue that is obtained after its corresponding Cultist is defeated or unveiled by another means cannot be read in their submenu.

In some cases, the unveiling clue simply replaces the directional hint. Zoisme's unveiling clue can be found in a wolf den very near the Cult's meeting place in Phokis, to which the player is directed by the letters obtained during The Serpent's Lair. Whether the clue is obtained before or after the quest, it becomes the only clue in her submenu.

Lastly, some Cultists have no "hidden" or "masked" state and go straight to "ready to unveil." These include the handful of Cultists who are definitively exposed after 'The Serpent's Lair' and are intended as the starting points of the player's hunt. Elpenor and Epiktetos are present in the menu immediately in the "defeated" state, given the timing of their demises.

Concept art of the cult meeting 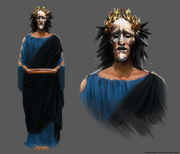 Promotional artwork of a cultist

A cult meeting in the Cave of Gaia beneath Delphi