"The priest pulls out another skull, crystal, and holds it high. The relic! I hear its hum in my own skull. Faint, but familiar!"
―Giovanni Borgia, upon first sighting a Crystal Skull, 1520.[src]

The Crystal Skulls are Pieces of Eden that function as communication and observational devices. Created by the First Civilization, three distinct variations of Crystal Skulls have been discovered so far.

The first type function much like modern telephone devices, allowing communication between all who possess a device. The second type has a record-and-playback function, allowing a user to record and send audio-visual messages to others who possess a counterpart Crystal Skull. Finally, the third works as a monitoring devices, projecting audio-visual surveillance through connection with a living being's blood in a vial.

The Crystal Skulls have notably been found in the remains of the old pre-Columbian civilizations of the Americas.

"I hear talking, but I cannot understand the words! I see a face within its cloudy core. No... in my mind. It has appeared in my mind!"
―Giovanni studying the Skull, 1542.[src]

In 1520, the Italian Brotherhood of Assassins assigned Giovanni Borgia to Hernán Cortés' crew to search for unknown Pieces of Eden in Mexico. Giovanni was able to locate a Crystal Skull in the possession of the Aztec civilization at Tenochtitlan, and retrieved it from an Aztec priest before it was to be utilized in a human sacrifice ritual, amidst the chaos caused by Cortés' attacking crew.[1]

Returning to Europe with the artifact, Giovanni took it to the scientist Bombastus, who was an expert in studying the Pieces of Eden. Though he subjected it to several tests, Bombastus was unable to discover its purpose, and the Brotherhood dismissed the Skull as little more than an ornate treasure.[1]

Despite this, Giovanni continued to study the Skull, gazing into it for at least an hour each day for about 22 years. Finally, in 1542, an unknown Chinese man, who had also acquired a Skull, used its communicative powers to contact Giovanni.[1]

In 1719, the Sage and pirate Bartholomew Roberts agreed to take Edward Kenway to see the Observatory, a First Civilization complex used to monitor the lives of people whose blood had been collected in blood vials. Central to the Observatory was the viewing device: a large armillary sphere with a Crystal Skull fixed in its core, where the vials would be inserted. The device would then spin and project images onto the wall behind it.

After leading Kenway to the center of the complex, Roberts activated the Crystal Skull that the Observatory housed to take a look through the eyes of Jack Rackham and Woodes Rogers. Betraying Kenway and leaving him locked in the Observatory, Roberts took the Crystal Skull and kept it with him while he sailed the West Indies and West Africa for the next three years.[2]

Kenway later tracked Roberts down to the island of Príncipe, and pursued him along the coast of West Africa before boarding his ship and killing him, taking the Crystal Skull with him. Returning to Havana, Kenway inserted Grand Master Torres's blood vial into the Crystal Skull to discern his location.

He left the artifact in Rhona Dinsmore's care while he searched for his target, only to discover he assassinated a decoy, with Torres' vial having been purposely mislabeled, presumably to keep his fellow Templars from spying on him. Soon afterwards, the Observatory was found by the Caribbean Templars, and Kenway hurried to stop their endeavor to take the complex for themselves. After killing Torres, Kenway and the Assassin Mentor Ah Tabai placed the Crystal Skull back in its original location and sealed the Observatory, hoping to keep it out of the wrong hands.[2]

"The good news is that they work. As a result, we now have a safe and secure communication channel for use after the launch."
―Alan Rikkin reporting on the Skulls.[src]

By 2012, a number of Crystal Skulls – the Mitchell-Hedges Communicators – had come into the possession of some high-ranking employees of Abstergo Industries, notably Warren Vidic, though their CEO Alan Rikkin noted they were extremely few in number.[3]

The Templars planned to use them as a completely secure means of communication, which the Assassins would be unable to trace. Due to their limited number, only the most essential facilities or members would have access to the Skulls.[3]

A Crystal Skull making a projection 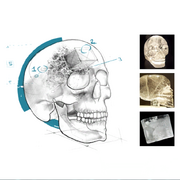 An Abstergo Industries depiction of a Crystal Skull