Cristina Vespucci (1459 – 1498) was a well-known Florentine beauty, and the daughter of the nobleman Antonio Vespucci. Due to her looks, Cristina was a favorite of painters, most notably Sandro Botticelli, who used her as a model for several of his paintings.

Cristina was born in Florence in 1459. She was somewhat responsible for starting her cousin Amerigo's career, since when Cristina attended a dinner party one night, she had a conversation with Lorenzo de' Medici and Manfredo Soderini about her cousin.[1]

There, she exaggerated Amerigo's brilliance, saying: "Try Amerigo out. I bet after several years you'll have your shipping company named after him." Lorenzo, charmed by Cristina's beauty, took her advice to heart, and several years later, Amerigo was the first to map out the New World and had it named after him.[1]

Cristina: "I told you. I'm not interested."
Vieri: "Sì. But I am."
Cristina: "Get in line."
—Cristina turning away Vieri, one of her many suitors.[src]

From an early age, Cristina caught the eyes of many boys who wanted to become intimate with her.[2]

One of those boys was Ezio Auditore da Firenze, who was encouraged to go speak with Cristina by his elder brother one night in 1476. However, Cristina had no interest in him and walked away. Ezio, who was not used to being turned down by a woman, shadowed Cristina from the rooftops and eventually followed her to her home, where he saw her being confronted by Vieri de' Pazzi.[3]

Vieri, who had already attempted to impress Cristina on previous occasions, grew impatient when Cristina turned him down yet again. Saying that he was "tired of waiting for her to open her legs on her own", he attempted to sexually assault her. However, he was interrupted by Ezio, who came to Cristina's rescue. The two engaged in a fistfight, with Ezio winning. As a result, Cristina was thankful for Ezio's intervention, and so she gave him a second chance, beginning a relationship with him.[3]

Following this, Ezio visited Cristina in her home quite frequently, and was described to be "unbelievably dexterous", as the guards knew that he visited her, but they were never able to catch him trespassing. On one occasion that Ezio slept with Cristina, he was discovered by her enraged father the next morning, who then set the guards on him, demanding his head. Luckily however, Ezio was able to escape.[4]

In 1476, shortly after the Auditore execution, Cristina helped Ezio give his father, Giovanni, and his brothers, Federico and Petruccio, their proper death rites by burning and setting their bodies adrift on the river Arno.[5][6]

Afterward, Ezio asked Cristina to come with him, as the Auditores were wanted in Florence at the time. However, Cristina refused, saying that she could not leave her own family. Ezio understood her decision, so he gave her a pendant to remember him by before leaving her.[6][5]

In 1478, Antonio insisted Cristina choose a husband to marry, and believing she'd never see Ezio again, she became engaged to Manfredo Soderini. The day before their marriage, however, Ezio returned to Florence for the first time in two years, and visited Cristina.[7]

Utterly surprised, Cristina fumbled with her words, but managed to tell Ezio about her engagement. Their conversation was cut short by the appearance of a couple who'd run to Cristina after seeing Manfredo in trouble with the people he owed a gambling debt to. Ezio left Cristina and rescued Manfredo; afterwards, Ezio kissed Cristina and told her that Manfredo was fine and that he'd made sure Manfredo would be a good husband to Cristina.[7]

Though she was heartbroken for losing Ezio, Cristina nevertheless married Manfredo, and they began living together in Florence.[8]

Eight years later, Cristina traveled to Venice to attend the Carnevale with Manfredo. Due to Leonardo da Vinci noticing and remembering her, he told about her to Ezio who was also at the Carnevale.[8]

Unaware of him, Cristina didn't notice as Ezio planted a note in her pocket. Curious, and believing the note to be from Manfredo, Cristina followed the instructions to an alley nearby. Still believing the man to be Manfredo, as he was wearing a mask, she kissed him.[8]

Discovering the truth, she angrily yelled at Ezio, because of how he'd left her the last time and how she'd heard nothing of him since then. Cristina told Ezio that she had loved him before, and before storming off, she angrily told him to never look for her again.[8]

In 1498, Cristina and Manfredo's home was attacked by Savonarola's followers. Though Manfredo attempted to fend them off, he was overpowered and left gravely injured while Cristina fled, though she was soon cornered by the men.[10]

Before they could beat her to death, Ezio found them and engaged in combat with Savonarola's followers, telling Cristina to run. Though the followers tried to follow her, Ezio killed them, and caught Cristina as she collapsed from her injuries. He brought her to a courtyard, looking for a doctor. Cristina showed Ezio the pendant she'd kept with her the past twenty-two years, and told him that she wished they could have had another chance together, and then perished in his embrace.[10]

Cristina appears to be based on Simonetta Vespucci, the cousin-in-law of Amerigo Vespucci, who was known as the greatest beauty of her age in Northern Italy, and was allegedly the model for many paintings by Sandro Botticelli, Piero di Cosimo, and other Florentine painters.

Cristina featured in several repressed memories during Assassin's Creed: Brotherhood, which were unlocked when Desmond Miles achieved certain levels of synchronization with Ezio's life via the Animus. To start each repressed Cristina memory, Ezio had to interact with a woman who closely resembled Cristina. Each time, the woman was doing something related to the repressed memory. For instance, with the memory during Carnevale, the woman in Rome was browsing at a mask shop.

Even though Cristina was married for around sixteen years, and saw Ezio only for a few short minutes once every several years, she admitted that she still loved him more than her own husband.

Ezio briefly mentioned Cristina in a letter to Claudia during Assassin's Creed: Revelations, as he reflected on his burgeoning feelings for Sofia Sartor. He wrote, "After the death of Cristina, something withered in me," indicating that her death had traumatized him to the point that he was incapable of loving another woman, at least until he met Sofia.

Though Ezio witnessed Cristina's death in Brotherhood, he was only later informed of her death by Niccolò Machiavelli in Renaissance.

Cristina's eye color appeared to have changed from blue to brown in Brotherhood, although in some memories her eyes remained blue.

In Renaissance, the pendant Ezio gave Cristina was decidedly different from the one in Brotherhood: instead of a golden cross with jewels, the novel depicted it as a simple, yet heavy silver pendant with the engraved initial 'A'. 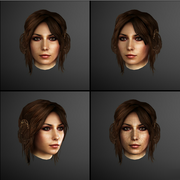