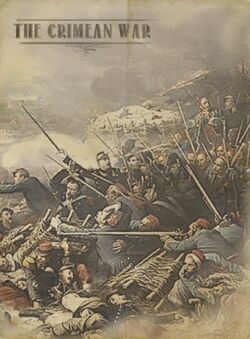 The Crimean War was a military conflict from 1853 to 1856 in which a joint alliance of Britain, France, the Ottoman Empire, and Sardinia checked the expansion of the Russian Empire into Ottoman territory and secured neutrality of the Black Sea. It was mostly fought in the Crimea, giving the war its name.[1]

The war was notorious for the gross incompetence of the commanders on all sides, such as the suicidal Charge of the Light Brigade in the Battle of Balaclava.[1][2] Notwithstanding this, it was the first war documented in newspapers, which captured through photography the horrors of war for the public.[1][3] Although the casus belli concerned religious privileges over Christians in the Holy Land,[1] the conflict was truly about the balance of power in Europe, and it effectively dismantled the Concert of Europe that had maintained relative continental peace since the Napoleonic Wars.[3]

The Crimean War began as a disagreement over whether Catholic or Orthodox Christians should control the churches in the Holy Land, though historian Shaun Hastings argued it was about whether Britain or Russia was allowed to have the bigger Empire.[1]

It started when Napoleon III sent a warship into the Black Sea to force Sultan Abdülmecid I to acknowledge French Catholicism as the authority over Christian sites in the Holy Land. Because the Eastern Orthodox Church had controlled those sites, Tsar Nicholas I responded by sending two corps to the banks of the Danube river. Diplomatic relations soured, and Britain and France allied with the Ottomans, leery of Russian expansionism and with troops already in the area.[1]

When Britain entered the Crimean War in 1854, Florence Nightingale found work as a nurse on the front lines. With a staff of 38 volunteer nurses and 15 nuns that she personally assembled, Nightingale and her team administered care to injured soldiers. Nightingale returned home in 1855 and established the Nightingale Fund, aimed at training nurses while the war raged on.[4]

Technology like the exploding artillery shell, the railroad, and the telegraph shaped the conflict, and the advent of photographic technology meant it was one of the first wars to be documented in the press. It was a war marked by incompetence on all sides.[1] On 24 October 1854, the allied forces had settled in for a long winter's siege of the Russian port of Sevastopol, beginning the Battle of Balaclava, which had an undecided outcome with many deaths on the British side.[2] Famously, British Templar Lord Cardigan, the leader of the Charge of the Light Brigade, upon realizing that the battle was lost, retired to his private yacht for a champagne dinner.[5]

The war ended in 1856 when the allies took the key Russian city of Sevastopol. Recognizing the inevitability of defeat, Nicholas I sued for peace, and as part of the terms the Black Sea was declared neutral and Moldavia and Wallachia were made independent. It cost the lives of half a million people and led to extensive calls for military reform and to nationalist movements across Eastern Europe.[1]