Assassin's Creed Wiki
Register
Don't have an account?
Sign In
Advertisement
in: Articles in need of sources, 1827 births, 1868 deaths,
and 11 more

"This tea was brought to me from India by a ship, then, up from the harbor to a factory, where it was packaged and ferried by carriage to my door, unpacked in the larder and brought upstairs to me. All by men and women who work for me. Who are indebted to me, Crawford Starrick, for their jobs, their time, the very lives they lead. They will work in my factories and so too shall their children."
―Crawford Starrick, 1868.[src]

Crawford Starrick (1827 – 1868) was the owner of Starrick Industries and, by 1868, the Grand Master of the British Rite of the Templar Order in London. He was responsible for the political and economic corruption that London was suffering in that year.

Born the younger son of the wealthy Robert Starrick in the West End of London, England, Crawford and his older brother were trained for competition. The Starrick brothers were educated in a variety of academics and sports, and they often challenged and fought each other, much to their mother's pride.[1]

At the age of twelve, Crawford entered boarding school. Due to the boy's imperious attitude, he was largely excluded by his peers, who took to calling him "Lord Starrick". He then began to see the two strata of humanity: those who served, and those who ruled. Realizing that he would earn no acquaintances, he sharpened his charm and hid his disdain with smiles and compliments to bend teachers and his classmates to his will.[1]

Upon graduation, and having inherited his first rail factory from his father, Crawford fancied himself as a railroad baron. To achieve this, he enacted a number of ultimately successful business purchases, as well as discreetly eliminating his competitors in order to gradually rise to the top, proving himself to be a brilliant businessman in his own right.[1] He was also ruthless towards his employees and installed Rupert Ferris as manager to maximize profit and keep spending to a minimum.[2] Crawford continued in his business' expansion and created several industries that reached across London.[1]

At some point during this time, Crawford became exposed to the Templar Order and, like he had within the rail industry, gradually rose to the top to become Grand Master of the British Rite.

Sometime during the 19th century, Crawford participated in an auction alongside Lucy Thorne, who managed to outbid him and subsequently acquired an occult manuscript. Starrick later inducted Lucy into the Templar Order, making her his lieutenant.[3] Despite their collaboration to locate the Shroud of Eden, Starrick had no intention of sharing it with Lucy; he nevertheless planned to provide her with financial compensation as a form of gratitude for her aid in locating the artifact.[1]

Through his network of Templar agents, he controlled London and oppressed the working classes in order to keep the Templars in power. During this time, the British Assassins worked to reclaim power in the city, and bring down Starrick, principally through their members Henry Green, and the twins Jacob and Evie Frye.[1]

Following John Elliotson's assassination at the hands of Jacob Frye, who also destroyed Starrick's Soothing Syrup production, the Earl of Cardigan and Philip Twopenny met with Starrick to discuss action against the Assassins. Starrick dismissed Jacob's efforts against his corporate empire, referencing the meticulous process in which his own Indian tea was delivered to him.[1]

Subsequently, Starrick met with his cousin, Pearl Attaway, who had manipulated Jacob into acquiring internal combustion engines from his lackey, Malcolm Millner, as well as assassinate him. Starrick promised to arrange transportation for the engines, unaware that Jacob was spying on them and had learned of Pearl's true allegiance.[1]

Sometime after their meeting, Jacob assassinated Pearl. Upon hearing of her death, a grief-stricken Starrick began playing his piano, before shooting a Templar underling of his out of annoyance for disturbing him. Lucy then entered the room, believing him unaware of Pearl's death before being told otherwise. Deciding to take the Frye twins seriously, Starrick declared his intention to bring them to justice.[1]

Shortly after, Starrick was informed of Lucy's assassination by Evie Frye's hands. To Starrick's fury, the key to the Shroud's crypt was taken as well.[1]

After Twopenny was assassinated by Jacob Frye, public trust in the currency dropped as inflation increased. To counter the inflation, Starrick raised the wages of his workers. At the same time, Prime Minister Benjamin Disraeli introduced the Corrupt Practices Act to fight electoral fraud.[1]

While meeting with Starrick, Cardigan expressed frustration at Parliament's lack of action and pledged to have Disraeli eliminated in order to end the Bill and maintain the Templars' influence on politics. However, Starrick scolded Cardigan for idling in the Sinopean Club rather than taking a more active role in defending Templar interests in Parliament. The Grand Master threatened him by putting a knife to his crotch and ordered him to keep the Bill from passing.[1]

Since all of his collaborators had now been assassinated by the Frye twins, Crawford took it upon himself to track down the Shroud of Eden. He managed to identify its resting place as being beneath Buckingham Palace, having been moved there from St. Paul's Cathedral by Prince Albert years earlier. Attending a party being hosted in the Palace gardens by Queen Victoria Crawford encountered Evie Frye, and pressured her for a dance. He revealed that he was planning on eliminating the heads of state and church once he had obtained his prize, and that he had snipers on the rooftops ready to eliminate her and the other guests out once the music had ended. However, Jacob eliminated all of Starrick's men and freed the captive royal guards. Upon being signaled that she was in the clear, Evie kneed Starrick, though he managed to escape with the key to the vault containing the Shroud that Evie had kept on her necklace.[1]

Descending into the crypt, Crawford found the Shroud and donned it. Using its powers of healing and enhanced strength, he began to overwhelm the Frye twins, with all of their would-be fatal attacks rendered ineffective. Before he could kill them however, Henry Green intervened and joined the fight. In spite of Green's best efforts, he proved to be no match for Crawford's newfound powers.[1]

Finally working together in unison, the Frye twins eventually managed to overpower Crawford. Jacob managed to pin down Crawford long enough for Evie to remove the Shroud from him, which now made him vulnerable to their attacks. Crawford was no match for the twins, without the Shroud, and was finally assassinated when they both managed to fatally wound him.[1]

As he lay dying, Crawford proclaimed that with his death, London would perish without him, as he had intended to create a paradise. He was then rebuked by the twins, before succumbing to his wounds. With Crawford's death, the Templars' control over London ended.[1]

At a young age, Crawford Starrick and his brother were trained for competition. As an arrogant individual, he showed great disdain to those who tormented him and eventually saw himself as a ruler among servants. Using his charm, he managed to bend people to his will.[1]

Above all, Starrick desired order and control. A staunchly conservative man, Crawford's actions in respect of his role as Grand Master of the British Rite all looked to maintain the status quo, whilst gradually improving the quality of life for his workers, and the city whole. Crawford initially viewed the interference of the Frye twins as little more than an inconvenience, but as their actions began to upturn the order he established, he took personal grievance with them.[1]

During the temporary collapse of the British currency, following the death of Philip Twopenny, the Governor of the Bank of England, at the hands of Jacob Frye, Crawford increased the average wage of his entire workforce in order to stave off the affects of inflation, and maintain his grip on power; he did this despite the incredulity of his fellow Templar, James Brudenell.[1]

Crawford also saw himself as a fair man. Before learning of her death, Crawford penned a letter promising to support Lucy Thorne financially for her remaining years, in gratitude for her aid in locating the Shroud of Eden. Crawford claimed that only one could wear the Shroud, and that it could only be him.[1]

Starrick fell in love once, to his cousin Pearl Attaway, but she refused to marry him. Despite this, as well as Pearl serving as Starrick's business rival, Starrick still held feelings for her. Upon hearing of her death, Starrick was grief-stricken, ruthlessly executing one of his men for interrupting his mourning.[1]

Influenced by François-Thomas Germain he had an extremist ideology towards the monarchy, since he considered it a tyrannical and oppressive system of government that caused social inequality with the monarch's mandates, trying to assassinate the Queen Victoria and her subordinates of Church and State, and thus restore a second republic. Crawford disdained the aristocratic elites and the Church, finding it pathetic that they were still at the top of society despite having lost much of their power during the Industrial Revolution, for which he criticized to Brudenell for his ancestry.[1]

"They have chosen a Grand Master so ruthless, so thorough, one might think Reginald Birch, himself, had returned."
―Henry Green, regarding Starrick's leadership of the Templar Order, 1868[src]

As Grand Master of the Templar Order, Crawford Starrick displayed considerable leadership skills that enabled the Templars to extend their influence all over London, both politically and economically. Henry Green once compared Starrick's influence to that of Reginald Birch.[1]

In choice of weaponry, Starrick carried with him a dagger as well as a revolver. In his final confrontation with the Assassins, he was shown to be a competent hand-to-hand combatant, able to go toe-to-toe with Jacob beneath the Buckingham Palace.[1]

Upon possessing the Shroud of Eden, Starrick was endowed with its abilities, such as instantaneously regenerating fatal wounds, enhanced physical strength, and the ability to drain his victim's vitality. Using the Shroud's abilities, Starrick was able to physically overpower the Assassins several times, regenerating any lethal damages done by the Assassin's Hidden Blades in the process, and even holding both Jacob and Evie by their throat simultaneously. He would have drained their vitality and killed them off, if not for Henry Green's timely intervention.[1] 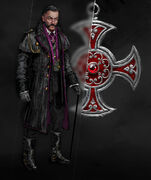