Cozumel is a small group of islands located in the Caribbean Sea along the eastern side of the Yucatán Peninsula.

Before the place was plundered and colonized by Hernán Cortés, Cozumel was inhabited by the Maya and dedicated to the worship of the moon goddess.

In 1716, the Portuguese pirate hunter Alvaro was searching in Cozumel for the escaped slave Jumao. However, Jumao had become a quartermaster aboard the ship of the pirate captain Alonzo Batilla. Alvaro demanded Alonzo to return the former slave, but Alonzo refused to hand his fellow comrade over, prompting conflict between the two.[1] 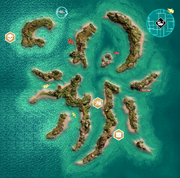 An aerial view of Cozumel

One of the many islands

A sinking gunboat in the waters of Cozumel

Retrieved from "https://assassinscreed.fandom.com/wiki/Cozumel?oldid=788362"
Community content is available under CC-BY-SA unless otherwise noted.