The Coyote Man (harvested from: Coyote Man) was an Animi Avatar used by the entertainment branch of Abstergo Industries, as part of their plan to influence the general public, via the console stage of the Animus technology. His specialty weapon was a shank, made from sharpened bone.

Approaching his target, the Coyote Man brutally kicks them in their left knee. While his victim grasps at their possibly-broken limb, the Coyote Man takes the opportunity to slash the right of their abdomen with his shank and then fluidly impales their heart from behind with it. Pulling his weapon back out, he watches sadistically as his target's body falls to the floor.

Walking up behind his target, the Coyote Man stabs his shank into their back. As his victim recoils in agony, he spins around in a full circle and slashes his weapon across their side, opening a deep wound while they collapse to the floor from their severed spine.

Running up to his target, the Coyote Man hastily removes his shank and cruelly stabs it down into their leg. From there, he rips his weapon out and bounds over their back as they keel over from his first strike. With his dagger still in hand, the Coyote Man plants it under his victim's chin, fatally impaling their brain and leaving them to bleed on the ground.

Rushing over to his target from behind, the Coyote Man leaps and forcefully pushes them down towards the floor. As they are rendered defenseless, he rides his victim into the ground and withdraws his shank, alternating between bashing their back with his fist and stabbing them. After peppering them with multiple wounds and blows, the Coyote Man stands up, satisfied with the bloody result.

The Coyote Man grabs his seated target's foot and drags them off the bench, until their head rests against it. Before his victim can do anything to defend themselves, he forcefully kicks them in the face, violently sending their head backwards and breaking his target's neck on the bench behind them.

Leaping from a rooftop, the Coyote Man removes his shank in mid-air, before landing on his target and planting the weapon into their head. Standing up, he stores his dagger away at his belt, following which he leaves his victim on the ground to die.

The Coyote Man could be customized in several ways:

Concept art of the Coyote Man, by Pierre Bertin 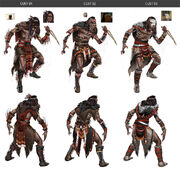 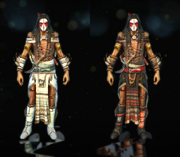 White and Dark Costumes for Coyote 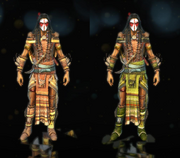 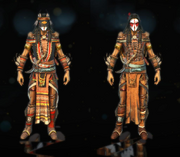 Retrieved from "https://assassinscreed.fandom.com/wiki/Coyote_Man_(Animi_Avatar)?oldid=831084"
Community content is available under CC-BY-SA unless otherwise noted.