"As beautiful as she is lethal, the Courtesan is most commonly known for her ability to set upon her quarry long before they are aware they are even being hunted. She is capable of maintaining a low profile despite her otherwise note-worthy appearance due to her apparent choice of occupation."
―Description of the Courtesan.

The Courtesan (harvested from: Fiora Cavazza & Fabiola Cavazza) was an Animi Avatar, used by Abstergo Industries to train the recruits in the first and second stage of their Animi Training Program. She wielded a bladed fan as her primary weapon, and was capable of killing by unfolding it or clasping it as a dagger.

The Courtesan had several unique moves:

Casually walking up to her target, the Courtesan suddenly springs up onto her tiptoes with surprising force. She then uses this momentum to open up her bladed fan and rapidly slices her victim's throat, following which they collapse to the ground, choking on their own blood.

Stealthily approaching her target from the front, the Courtesan savagely kicks their left leg. As they clutch their injured limb, she reaches for her bladed fan, still folded, and then slashes her victim across the side of the abdomen with the fan's spine. The Courtesan then swiftly follows up this attack by impaling her target's spine with her weapon, before storing it as they collapse, paralysed and bleeding out.

Quietly nearing her target from behind, the Courtesan reaches for her bladed fan, though they notice her presence and look over their shoulder towards her. She then takes the opportunity to pull out her weapon and rapidly slash her victim's throat, sending them twirling to the ground, before putting her fan back at her waist.

Quietly sneaking up to her unsuspecting target, the Courtesan suddenly and viciously stabs them in the back with her folded fan's spine. Before her victim can react in any way, she spins and slashes the newly inflicted wound, severing their spine at the same time. She then puts away her fan, satisfied that her target is dead.

Dashing towards her target from the front, the Courtesan leaps upward, spinning in the air like a pirouette, while taking out her bladed fan and slashing their throat. She then lands daintily on her feet and restores her fan to its holder, while her victim's dead body lies on the floor.

Sprinting up to her target from behind, the Courtesan rolls over their back with her legs extended in the air, before landing on her knees in front of them. Then, while her victim is still dazed, she whips out her bladed fan and severs their neck to the bone, before calmly returning her fan to its holster and walking away.

Innocuously approaching her seated target, the Courtesan tilts their face up by the chin and stares almost sensuously into their eyes, before suddenly taking her bladed fan and slashing them across the neck. Her victim stands and grasps at their throat to stop the bleeding, but by then it is already too late, with their dead body collapsing to the ground.

Grabbing her seated target's foot, the Courtesan drags them off the bench until their head rests against it. Before they can do anything to defend themselves, she forcefully kicks them in the face, violently sending their head backwards and breaking her victim's neck on the bench behind them.

Pouncing on her target from above, the Courtesan skillfully lands on them to cushion her fall. After this, she unfolds her bladed fan, before bringing it back around to slash at their neck. The Courtesan then retracts her fan to store it back in its holster, walking away and leaving her victim to die from the fatal wound.

Leaping from above, the Courtesan takes out her folded fan, before landing onto her target and embedding her fan's spine into the side of their head. She then removes her weapon from her victim's skull and stands up, storing it at her waist.

The Courtesan could be customized in several ways:

In the second stage of the Animi Training Program, the Courtesan was not customizable, alongside the Ottoman Doctor, the Ottoman Jester and the Knight.

Early development art of the Courtesan

Concept art of the Courtesan 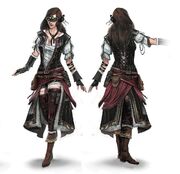 Alternate concept art for the Courtesan, displaying her Elite gear

Official artwork for the Courtesan 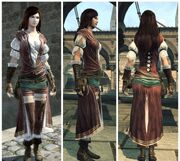 In-game concept art for the Courtesan

The Courtesan finishing off the Executioner

The Courtesan assassinating the Priest