The Count (harvested from: Vlad Tepes) was an Animi Avatar used by Abstergo Industries, to train the recruits in the second stage of their Animi Training Program. His specialty weapon was an axe-like mace which he used to brutalize his victims.

The Count had several unique moves:

Approaching his target slowly, the Count grabs them by the neck and squeezes it roughly, immobilizing them and choking them at the same time. From there, he retrieves his mace from his belt and sweeps their legs out from underneath them, sending them collapsing to the floor. With his target defenseless, the Count brutally slams his mace down onto his victim's chest, shattering their ribcage and leaving them coughing up blood.

Stealthily walking up to his target from behind, the Count roughly shoves them by the shoulder, causing the target to turn around in response. Having already unsheathed his mace, the Count smashes it hard into their face, shattering his victim's skull and killing them instantly.

Rushing to his target, the Count kicks his foot into their stomach, winding them, before wielding his mace in both of his hands and smashing it upwards like a strike of a golf club. Driving his weapon into the face of his keeled over victim, his weapon breaks their skull as they are knocked upwards into the air. From there, the Count secures his mace at his side before gravity returns his target to the floor, head first.

Running up to his target from behind, the Count hits his bladed mace into their right leg, unbalancing them, before spinning around them with his mace to gain momentum. As they are left with one leg for support, the Count fully turns himself around them and twists his mace to add rotational force, before swinging it into the side of his unfortunate victim's face. Crushing his target's skull and sending them flying to the side, they slump into a pile on the floor as they land, while the Count replaces his weapon at his side.

Grabbing his seated target's foot, the Count drags them off the bench until their head rests against it. Before his victim can do anything to defend themselves, he forcefully kicks them in the face, violently breaking his target's neck on the bench behind them.

Having spotted his target, the Count leaps from above, while unsheathing his mace as he jumps. Skillfully breaking his fall by landing on his hapless victim, he brutally smashes his mace into their skull, crushing it and killing them instantly. With his target dead, the Count stands up and removes his mace from their head, before placing it back at his waist.

The Count could be customized in several ways:

Concept art of the Count

A full body render of the Count 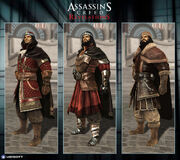 Development artwork of the Count 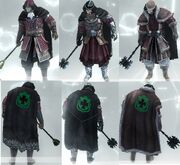 Counts and Sentinels in an Artifact Assault session