A pawn of the Assassins and Philip IV of France, Clement came to power after Benedict XI was poisoned in Perugia by Guillaume de Nogaret,[1] who was secretly the Assassins' Mentor.[2] Under influence of Nogaret and the Assassins, Philip and Clement collaborated to disband the Order of the Knights Templar after they had been falsely accused of heresy.[3]

In 1307, Clement issued the papal bull, Pastoralis praeeminentiae, ordering the arrest of all Templars and seizure of their properties on behalf of the church.[4] However, a year later, Clement wrote the Chinon Parchment which inexplicably absolved Templar Grand Master Jacques de Molay of all charges. In order to ensure that their plan to destroy the Templars continued, the Assassins stole the document, which would only be re-discovered in 2001.[3]

In 1312, Clement officially disbanded the Knights Templar in his papal bull, Vox in excelso. All of the Order's assets were later given to the Knights Hospitalier. After a seven year trial, Clement was present during the burning of Jacques de Molay in 1314. As he burned, Jacques cursed Clement by claiming he would die within the year,[3] and his statement indeed came true, as Clement died on April 20, 1314. 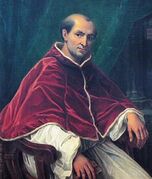 A painting of Clement V