"There are several factories about the city that are powered almost entirely by child labor. Those children work long hours, with little pay, and most are not permitted even to leave the factory grounds. They suffer terribly."
―Clara on the child laborers' plight, 1868.[src]

Clara O'Dea (born 1856) was a young British girl that oversaw a network of street urchins and pickpockets in London during the mid-19th century. She provided the local Assassins with information on happenings within the city, in exchange for their help in liberating children from factories.

Born in 1856, Clara grew up in an underprivileged home. Her mother, like many Irish women at the time, worked as an indentured servant in an upper-class household in the Strand. Secretly, Clara followed the privileged family's private lessons and gained an education her parents would never have been able to afford for her.[1]

However, Clara's mother was wrongly accused of theft at some point and subsequently fired by her employers, forcing her to find other means of survival. By the time she turned ten, Clara had become the sole breadwinner in her household, with her father having left a year prior, while her mother was bedridden and sick with grief.[1]

To support her family, Clara took to the streets and found a sense of belonging amongst the orphans. After her mother passed away, she dedicated herself to providing for other children in need.[1] At some point, Clara became acquainted with Henry Green and established a partnership with him, supplying him with information from the orphans.[2]

Working with the Frye twins

Clara: "In exchange for our services, we ask a small favor."
Jacob: "Well, why not? You seem to have taken most of my money. Why not take a small favor, too?"
—Jacob bickering with Clara, 1868.[src]

In 1868, Clara met Assassins Jacob and Evie Frye, who were hoping to benefit from the young girl's network of spies. Clara agreed to provide them with intelligence, on the condition that they free groups of children forced to work in sweatshops about the city. She and Evie subsequently sealed their pact by spitting into their hands and shaking them.[3]

Sometime after Jacob's assassination of John Elliotson, the children in Clara's care began falling ill, with the usual tonics failing to cure their ailments. As her own health began to deteriorate, Clara visited Lambeth Asylum, hoping to acquire proper medicine. By chance, she encountered Evie, who had come to check up on the borough, and attempted to explain her reason for being there, but fainted into Evie's arms.[4]

Carried inside by Evie, Clara was left in the capable hands of Florence Nightingale, who explained to Evie that counterfeit tonics had been circulating ever since Elliotson's murder. The Assassin subsequently recovered the supplies needed for the cure, ensuring Clara's recovery, as well as that of the orphans in her care.[4]

After the Frye twins had dismantled all of the child labour factories in the city, Clara met with the twins, thanking them for their efforts, before hugging Evie.[5]

Possessing a cheerful disposition, Clara was as much a child as she was a businesswoman. She enjoyed playing simple games with her peers, but just as easily slipped into a more mature persona, negotiating deals and speaking of "terms" and "appointments". At heart, however, Clara was a kind girl that cared for the children of London and readily risked her own well-being to aid them.[5]

Clara is the feminine form of the Latin adjective clarus, meaning ’clear, bright, famous’. O'Dea is an Irish clan surname that derives from the Gaelic O' Deaghaidh, which translates loosely as ’the searcher’.

In The Art of Assassin's Creed: Syndicate, Clara is described as the waitress of the Seven Bells, the headquarters of the Rooks. 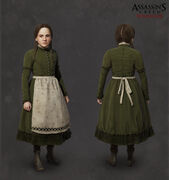 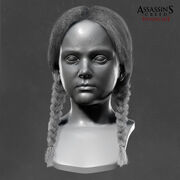 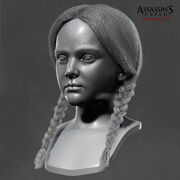 Clara with the street urchins

Clara explaining the plight of the child laborers

A sick Clara being carried by Evie